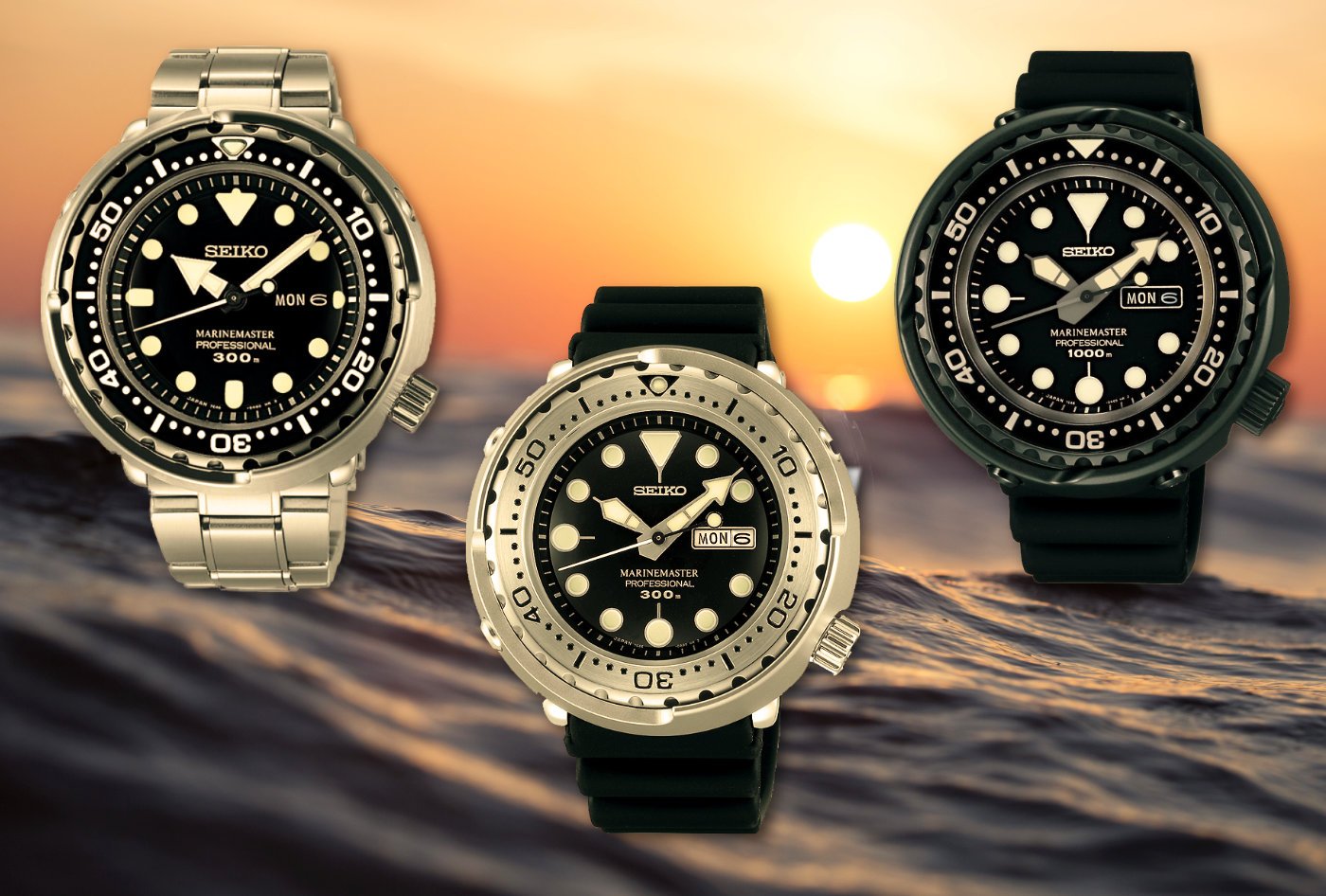 In 1975, A saturation diver from Kure City in the Hiroshima prefecture of Japan sent Seiko a complaint regarding the reliability of it’s existing line of professional dive watches. The complaint exposed some notable flaws in it’s existing design, most notably their susceptability to the absorption of helium gas, a component of the air mixture that saturation divers were enveloped in.

In response, Seiko’s engineers (led by Ikuo Tokunga), set out to make the perfect dive watch for professional saturation divers. Nicknamed the “Tuna” because of it’s cylindrical slab of lugless casing, the resulting product was a marvel of modern engineering. It’s monocoque titanium case, L-shaped gasket, and unique shrouded design were all firsts in the industry.

The result was a watch that was impervious to helium gas penetration, and one that could withstand the pressure of massive depths up to 600m. It instantly became a modern classic for Seiko, and has been in continuous production for the last 42 years.

The Tuna has evolved over the years, although many of the modern incarnations share the iconic design of their predecessors. Available in a variety of sizes, materials, and colors, the Seiko Tuna is an extremely collectible model with a rich history and an affordable price-point.

Today, the Seiko Tuna is powered primarily by Seiko’s innovative 7C46A quartz movement. Although many purists will look down upon the fact that the majority of Seiko Tuna’s are battery powered, a deeper look suggests that this unique movement is one of the most robust and highest quality quartz movements money can buy.

The Seiko Tuna series primarily utilizes Quartz movements, with the exception of the early models (“The Grandfather Tuna”) and some of the higher-end modern incarnations (namely the “Emporer” and “Hockey Puck”, which utilize the 8L35 and 6159 respectively). These high-end quartz movements are not your average $25 Chinese quartz module, they are designed specifically for the Tuna by Seiko and are incredibly accurate and reliable.

The most common movement found in these watches is the Seiko 7C46, a 7-jewel high-torque quartz movement with a 5-year battery life. These movements are designed by Seiko in-house and not utilized in watchs from any other brand. They are fully serviceable, anti-magnetic, and incredibly energy efficient. It is easily one of the highest quality quartz movements that money can buy.

The 8L35 movement found in the “Emporer Tuna” is an undecorated derivation of the Grand Seiko 9S55, a highly-accurate mechanical movement with a 28,800 beat rate and a 50 hour power reserve. It’s a high-end movement utilized in some of the best Grand Seiko dress watches, although lacking some of the polish and finishing. Since these watches do not have display casebacks, it’s a perfectly acceptable trade-off for the increase in performance.

The new Seiko Tuna SBDB009 and SBDB013 contains Seiko’s incredible spring drive movement. It’s a quartz/automatic hybrid that has such a high beat rate that it appears to glide continuously around the dial. Additionally, this movement has a power reserve indicator, lacks the ‘day’ window, and places the date between the 20 and 25 minute demarcations. It is considered by many to be one of the most technically impressive Seiko movements.

The automatic Tunas are an excellent choice for mechanical movement afficianados. I would argue, however, that the Quartz movement found in the majority of these models is the superior choice. Their accuracy and reliability make it a perfect fit for a tool watch of this caliber.

The Ana-digi Tunas from the early 80’s have been lovingly nicknamed “Arnies” by hardcore Seiko fans. This funky vintage shrouded diver was worn by Arnold Schwartzenegger in a bunch of his action movies (Predator, Raw Deal, Commando, Running Man, and Twins). Whether you’re a Seiko fan or a classic action movie fan, this is a great model to grab.

It utilizes the H558 movement, which is a basic 3-jewel quartz movement with a module for an LD display at the top of the dial. It has a digital alarm and chronograph functionality, a plastic shroud, and a bi-directional bezel, making it a very unique entry in the series. It is available in both black and orange.

The 300M Tunas are the heart of the Seiko Tuna line, and by far the most common and collectible models. The majority of these models have a stainless steel case and a stainless steel shroud, with the exception of the SBBN031 which is titanium and ceramic.

Seiko was actually the first company to utilize Titanium in their watch construction, a material that is highly corrosion resistant and light-weight, making it a highly functional choice for a dive watch meant to be exposed to the elements.

The SBBN015 and SBB017 are the most popular of the “last generation” Tunas, and are differentiated simply by the color of the date wheels and the bezel.

The 600M range of Tunas contains a few oddities. The “Ash Tray” eschews the classic shroud for a scalloped titanium bumper. The “Golden Tunas” introduce rose gold accents on the bezel and crown. And the “Hockey Puck” is an absolute monstrosity, coming in at 52mm in size and 16.23mm in thickness, better left to the large-wristed among us.

Of note in this range is the “Grandfather Tuna”. This particular model was the first Tuna released in 1975, and broke all kinds of technological barriers with its titanium case, L-shaped gasket, ceramic-coated shroud, and vented rubber strap. Additionally, it’s one of the only Tuna models with a mechanical movement. These are exceedingly rare these days, and you’re going to have to pay a premium if you want to get your hands on one.

The 1000M Tunas are the most functionally robust models in the line and contain a few unique variations and special editions. The “Darth Tuna” is named for it’s insidious black case and shroud, and the “Dolphin” and “Blue Ocean” introduce a few brightly colored ceramic shrouds to the lineup.

Most notable in this range is the “Emporer Tuna”, an absolutely massive titanium dive watch powered by an incredible GS derived mechanical movement (the 8L35). This is the boss-man of the Tuna line-up and not to be trifled with by those with small wrists or small egos.

Overall, the Seiko Tuna is a must-own for any serious tool watch afficianado. It’s lugless design makes it comfortable for any wrist size, and it’s no-nonsense toolish design is backed up by serious dive watch capabilities. Whether you’re a saturation diver or a desk diver, this watch has serious collector appeal and belongs in the conversation with much more expensive competitors.

Please let us know if we’ve missed any of your favorite Tuna models in the comments below!