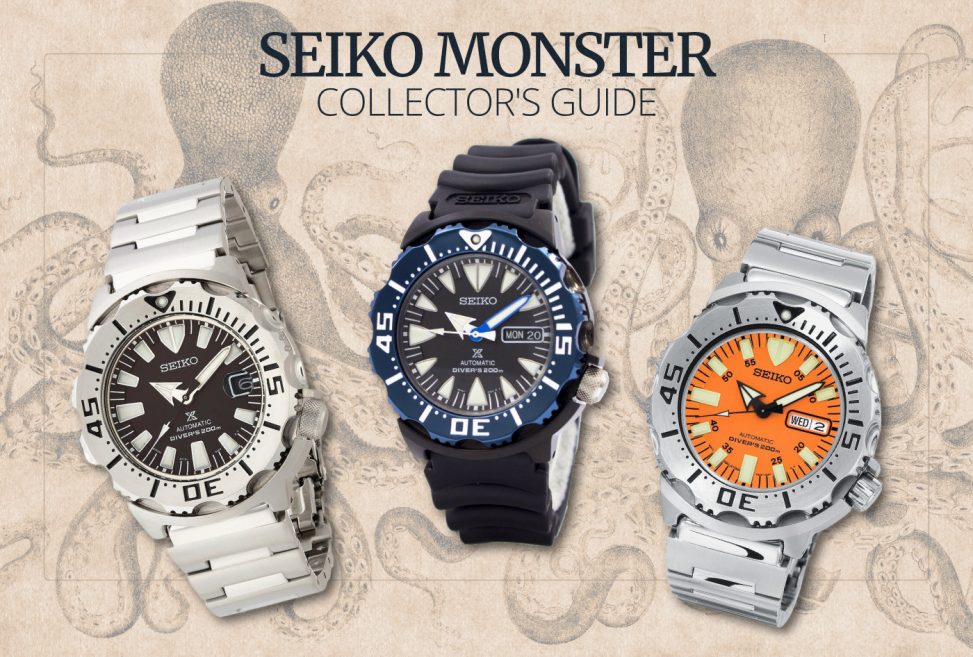 The Seiko Monster might be one of the most polarizing dive watches ever released.

The love-it or hate-it design has camps firmly entrenched on either side, with dedicated followers declaring their love for the quality and value, while detractors scratch their heads at the aggressive and somewhat ugly overall design.

Both sides have a point – the Seiko Monster is no beauty queen. But with a watch like the Monster, that was never the intent. Just look at the name: “Monster”, it was always destined to scare some people.

The Monster is all about rugged dive capability offered at an exceptional value. Like the Seiko SKX, you can most Monsters for less than $500 – and for that you’re getting a pretty amazing watch: 200 meters of water resistance, a reliable low-maintenance mechanical movement, and an incredibly overbuilt dive watch that can withstand a lot of abuse.

Not to mention, the aggressive design has been known to grow on the unbelievers. I’ve witnessed many a convert spend years hating the Monster before finally giving up and falling in love with what it is: an unabashed tool-watch.

Enjoying 10 years of continuous production, there is no denying that the Monster might be one of Seiko’s most popular modern dive watches. The basic model has evolved over three generations, and Seiko has released dozens of highly collectible special editions and unique colors to satisfy collector’s insatiable appetite for this affordable diver.

Let’s dig in, starting with the various Seiko movements used in this model.

A handy printable visual reference guide containing the latest known model names and prices for the available Seiko Monsters, both domestic and abroad.

Seiko Monsters primarily use one of four popular Seiko Movements, the 7S26, the 7S36, the 4R36, and the 6R15. All of these movements are all fairly similar, considering that they share the same basic architecture.

The 7SXX line of movements are Seiko’s popular workhorse movement used in much of their entry-level automatic watches since 1996. The 7S26 and 7S36 are identical movements excluding the addition of two additional jewels on the 7S36, which are purely decorative.

The 4R36 and 6R15 are upgrades on this basic architecture, adding hacking and hand-winding capabilities. The 6R15 is the most desirable movement of this group, owing a 50-hour power reserve to it’s upgraded Spron 510 mainspring (a highly elastic alloy developed by Seiko).

None of these movement are known for their fit and finish, however they are incredibly reliable and easy to maintain, due to their relative simplicity and availability of spare parts. Accuracy is typically +/- 25 sec / day, although they can be made more accurate with proper regulation.

First released in basic black and orange, the original Monster set the standard for many of this watches now iconic characteristics: the chunky case, insane glowing lume, a toothy steel ratcheted bezel, and the stubby and short broad-arrow hour hand.

There were many special editions of this watch produced, with some of them being incredibly rare and collectible. See the ‘Limited Edition’ section for more details.

Most of the limited edition Monsters from this generation were released in very limited quantities in Thailand. Although a couple of limited editions have unique specs, the majority are basic variations on the color and materials of the base model (1st and 2nd gen) Monsters.

Why Thailand? Most likely because Seiko has a manufacturing and design facility there and early iterations of this watch enjoyed robust sales in the Asian markets. Or maybe Thai people just like crazy looking watches.

In what may have been a move to take the Monster “theme” a bit too far, the second generation dial was updated to look like the gaping maw of a lamprey attached to a poor lake trout.

Still, the new model proved immensely popular and the upgrades at movement provided the watch with much needed hacking and hand-winding capabilities.

From a strict design perspective, the third iteration of the Seiko Monster is by far the most balanced. Gone are the shark-tooth indices of the second generation, replaced with the trapezoidal markers reminiscent of the first release. The day feature was dropped, and a Rolex-esque magnification window was added to the crystal. The 3rd-gen Monster also contains the premium 6R15 movement, a module otherwise used in the mid-range SARB line (eg. The “Alpinist”, and the “Cocktail Time”).

Unfortunately the 3rd generation models are not as easy to acquire in the U.S. market yet, you’ll have to buy from a global/Japanese marketplace like Ebay, Rakuten or ShoppinginJapan.

Additionally, these models have moved into the midrange market in terms of price (~$500) and no longer have the value that made the original models so attractive to entry level buyers. Still, they are higher quality than the originals and well worth the price.

The Night Monsters are blacked-out variations of the original Monster design produced for the Japanese domestic market (JDM), featuring blacked-out PVD bezels, cases and bracelets. Originally intended to be limited editions, these watches enjoyed an extended production run and are relatively easy to acquire online.

The Land Monsters are like a strange love-child between a Seiko Alpinist and the original Monster. Although it mostly looks like a standard Monster, it also features a rotating directional bezel controlled by the crown at 2 o’clock. Even though it’s focused on trekking on land, it maintains it’s 200M WR and timing bezel, making it a usable dive watch as well.

The so-called “Baby Monsters” (designated with SNZF) share the iconic styling of the original Monsters but lack some of the real dive-watch capabilities of their more serious siblings. The dial sports the “Seiko 5 Sports” logo, and the lack of screw-down crown downgrades the depth rating to only 100 meters.

These were intended more for the fashion market, and can be had for closer to $100. They still contain automatic movements though, and in that regard they still represent a great value for a mechanical watch.

Another JDM-only version of the Monster released in 2009, the Seiko “Trek Monster” is the land-lover’s companion to this iconic dive-watch. Powered by the 6R15 like the 3rd generation Monsters, the Trek Monsters feature a navigational bezel in place of the standard diving bezel and more of a field watch styling for the dial and hands.

These models are slightly smaller at 40mm, but still boast a 200M water resistance just in case you can’t keep out of the water.

Although some people dispute the fact that these models should be classified with other “Monsters”, I believe they share enough of the design DNA and components to include them in this reference guide.

We’re able to automatically pull the lowest available price For the Monster models that can be readily obtained on Amazon. See our table below for a quick price comparison of the common models.

Prices are updated every 60 minutes.

Please let us know if we’ve missed any of your favorite Monster models in the comments below!