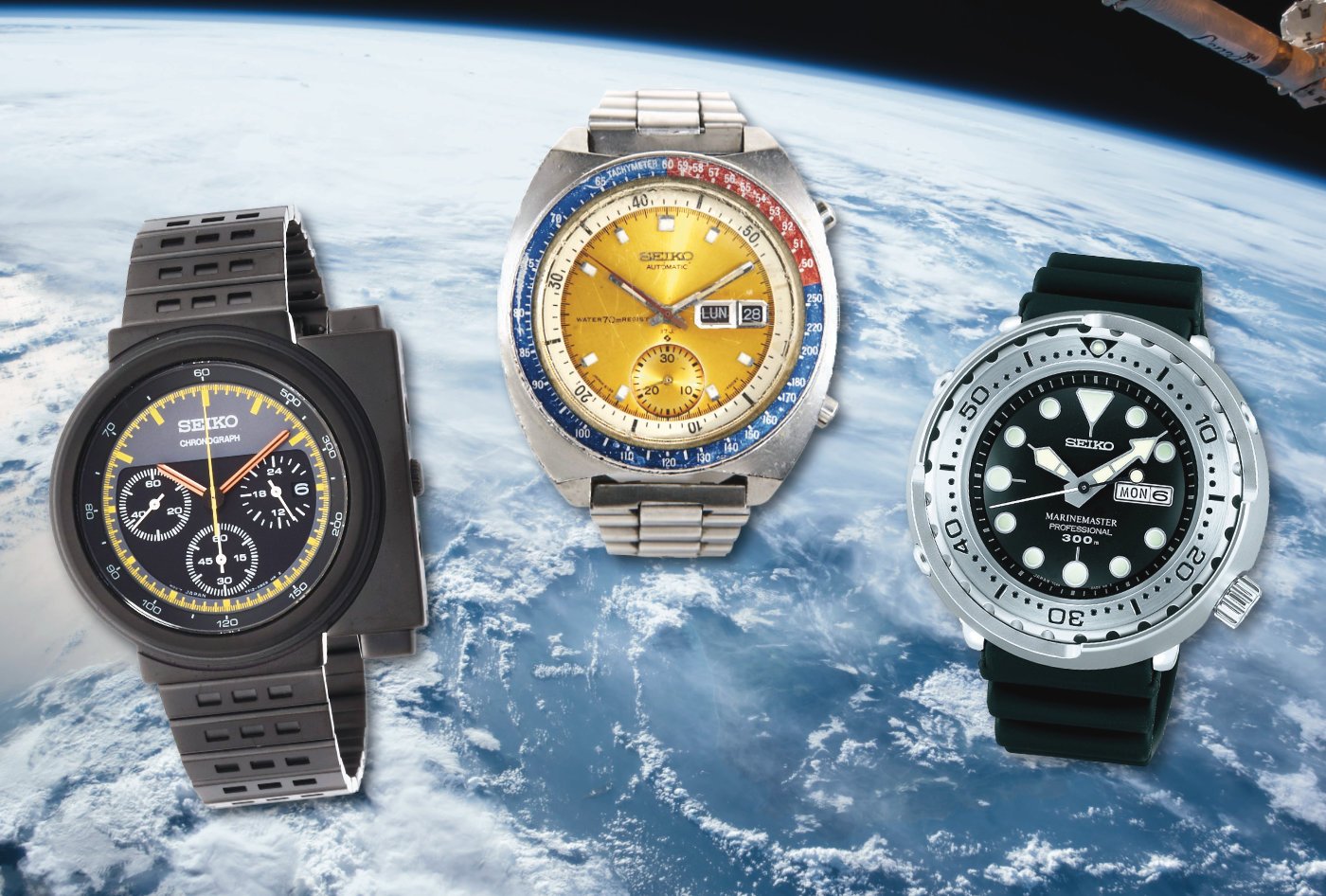 Over the years, Seiko has released thousands upon thousands of different watch models. Although Seiko has officially named a few of them (like the Alpinist or Spirit), the majority are simply obscure and forgettable reference numbers (like SRP775, 6105 or 6159-7010).

Like any good obsessive fan-base, the most collectible Seiko models have earned unofficial nicknames – a sure-sign that a particular reference has reached cult status within the community.

You’ve probably heard of the big names – Monster, Turtle, and Tuna to mention just a few. But many people are surprised to learn that Seiko didn’t actually come up with these names, even though some have been unofficially adopted by Seiko since their inception.

In this article, I’m going to explore the most popular Seiko nicknames dubbed by fans, along with a reference table of honorable mentions (both vintage and modern) for the true Seikoholics. 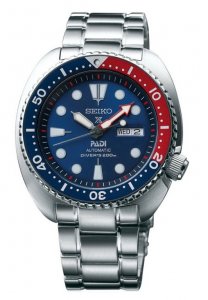 The Turtle is by far the most popular of the Seiko nicknamed watches, both in it’s modern (SRP77X) and vintage (6309) incarnations. A lot has been written about the Turtle, so I won’t go into much detail – but this model is well-known to be one of the best value’s you can get in an automatic diver for under $500.

The Turtle is a nice upgrade from the SKX, housing a high-quality 4R36 Seiko movement and available in a variety of colors and limited editions.

Vintage models produced between 1976 and 1988 are also plentiful and inexpensive, going for around $300 – $500 on the secondary market.

This model is named after it’s distinctive shape, a 70’s-inspired “cushion-case” that looks a lot like a turtle shell. Seiko flooded the market with these last year, so keep an eye out for falling prices on used models. 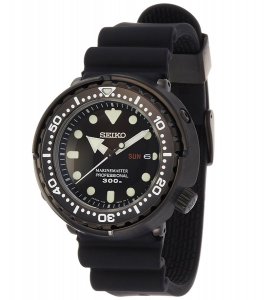 The Tuna is another Seiko dive watch with a fanatical following. Tuna is short for ‘tuna can’, a reference to the massive cylindrical shrouded-case design. This watch has been produced by Seiko since 1975, with the debut of the 6159-7010 (now called the “Grandfather Tuna”).

Most of the available Tuna models have quartz movements, although there are a few higher-end models with automatics (The Emporer Tuna comes to mind).

Some may mock those willing to spend $500+ for a quartz watch, but these aren’t your garden variety quartz movements. Designed specifically for the Tuna, this high-torque movement is fully serviceable and highly efficient. They are also incredibly accurate and much less prone to failure, a benefit for those who actually use their watch for saturation diving.

A lot of other variants of the Tuna nickname exist as well: The Baby Tuna (SRP637) , Emperor Tuna (SBDX011), Darth Tuna (SBBN013) are popular variations of this model. 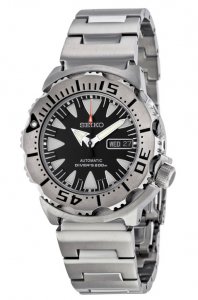 The Monster is one of the most polarizing dive-watches in the Seiko stable. True fans swear by it’s indestructible construction and high-quality build while detractor’s shrug off it’s “toothy” dial and aggressive appearance. Either way, there is no denying the popularity and longevity of this entire model range, now in it’s third generation.

The Seiko Monster spans almost 20 years and dozens of special editions and colors. The 1st and 3rd generation are a bit more conservative in the design department, with the 2nd generation really going all in on the aggressive aesthetic. The dial itself appears to be lined with sharp teeth, a design that doesn’t appeal to everyone (some say it grows on you, though).

There are many variants of this nickname as well: Baby Monster, Night Monster, Trek Monster and Land Monster just to name a few. Feel free to explore the entire Seiko Monster catalog in-depth with our Ultimate Seiko Monster Collector’s Guide. 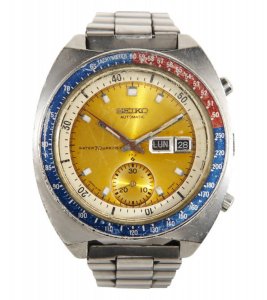 Although no longer in production, the Seiko Pogue 6139 is one of the most collectible vintage Seiko watches that also happens to have one of the most interesting back-stories.

For many years it was thought that the Sinn 140 was the first automatic chronograph in space (the Speedmaster was hand-wound).

It wasn’t until recently that an eagle-eyed Seiko-fan spotted a 6139 in a photo of Colonel Pogue (a NASA astronaut) at a Skylab control panel in 1973. Although it wasn’t official NASA kit, NASA allowed him to bring it on the mission along with the official mission timers. Second hand reports from those who have spoken with him say the watch performed flawlessly.

That makes this cheap and sunny Seiko from the 1970’s the first automatic chronograph to be worn in space. Available in a few different color combinations, the yellow-dialed version here has become the most iconic. The 6139 can be found on the secondary market for around $300 – $500 dollars. 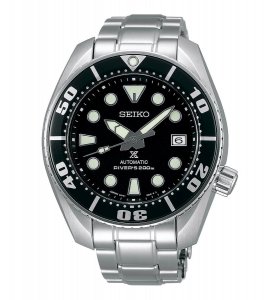 The Sumo, and it’s blue colored sibling (creatively named the Blumo) are definitely high-up on the list of coveted dive watches for Seiko fans. Often mentioned in the same breath as the Samurai, the Sumo is one of the highest-quality divers you can get in the $500 to $1,000 range.

There are a couple of theories around the origin of this particular watch’s name. The first is it’s relatively portly case in proportion to it’s 20mm band. Another is that the marker at 12’o clock resembles the ‘Mawashi’, the underwear worn by Japanese sumo wrestlers during a match.

Either way, the Sumo is a heavy-duty watch at 170 grams and 44mm diameter, making it a dive-watch ill-suited for those with small wrists.

There are many other popular Seiko watches that have been dubbed by the enthusiast community, including the Seiko Ripley (or Alien), a watch worn by Ripley in the classic movie of the same name, the Arnie, a analog/digital hybrid watch worn by Arnold Schwarzenegger in five blockbuster action movies, and the Samurai, a titanium watch whose angular curves and sharp hands evoke images of feudal Japan.

See the grid below for an overview of the most common nicknamed models.

There are certainly more nicknamed Seiko watches out there – let us know if we’ve missed anything in the comment section below!