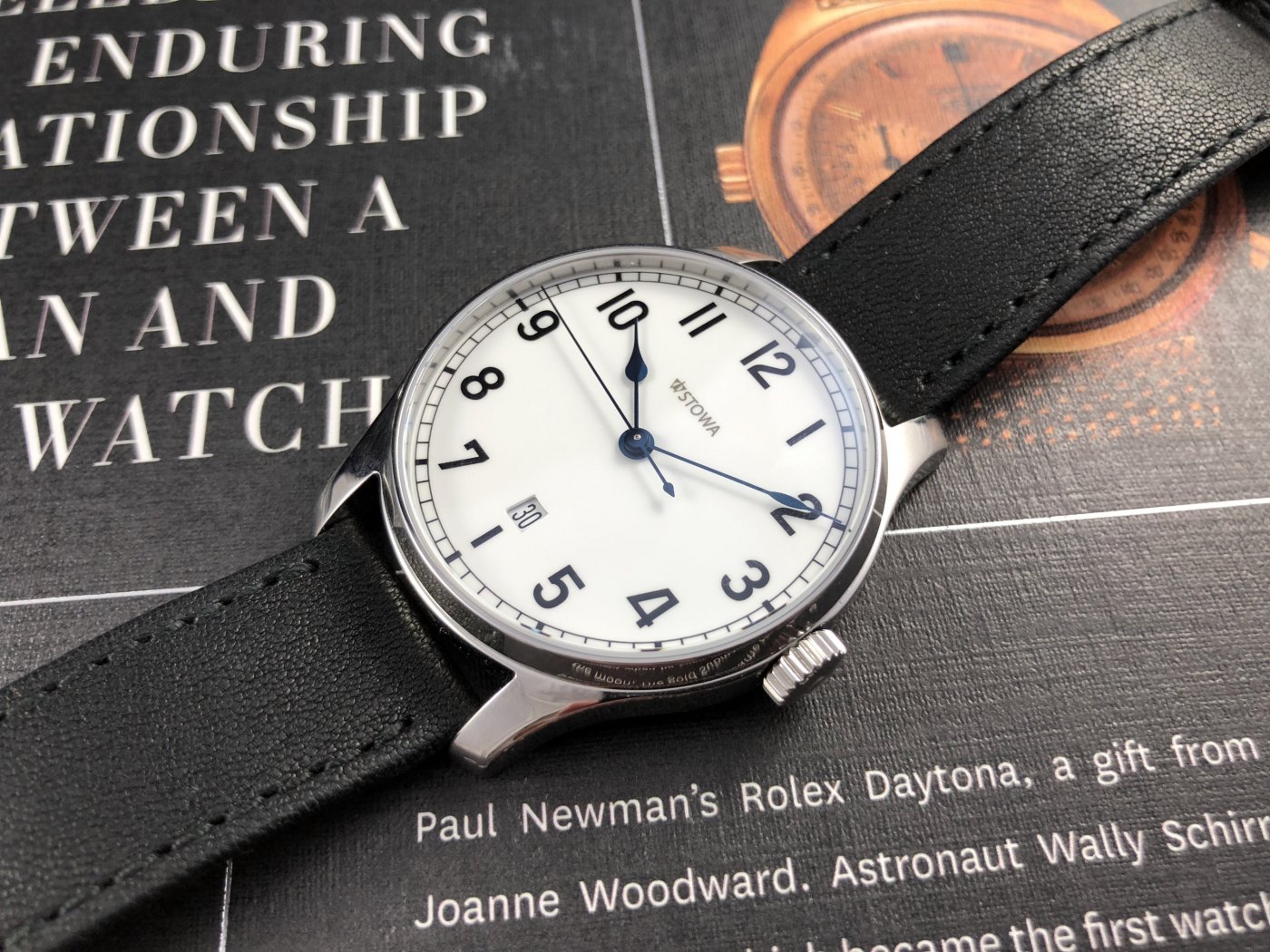 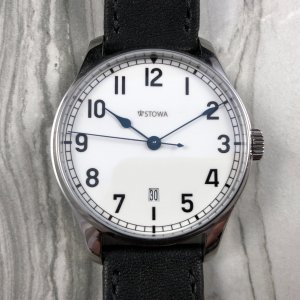 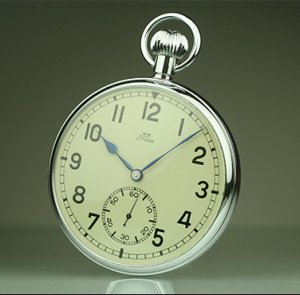 The long history of marine chronometers can be traced all the way back to the early 18th century. In 1714, the British government offered a longitudinal prize for a method of determining longitude at sea, and a man by the name of John Harrison from Yorkshire answered the call. In 1735, he completed a clock based on a pair of counter-oscillating weighted beams connected with springs whose motion was undeterred by the undulations of the ship. These complex machinations were absolutely remarkable for the time-period, and many of his findings paved the way for military watchmakers in the coming centuries.

Fast forward to the late 1930’s, Stowa began producing high-grade marine chronometers for the German Kriegsmarine. These deck watches were absolutely vital to Navy captains to determine the exact position of their vessel in conjunction with a sextant, which was often kept nearby in the captain’s quarters. An absolutely low-tech yet fascinating way to determine your position using the difference between actual time and GMT, and the alignment of celestial objects.

In 2002, Stowa launched it’s Marine line, an austere array of wristwatches paying homage to the original Stowa observation pocket watch. Although only 288 examples of this original watch were ever made, Jörg Schauer’s decision to re-invent this classic has made this piece of history available to the modern consumer.

Today I’m reviewing the Stowa Marine Klassik 40, the simplest (and cheapest) version of the dozen configurations made available by Stowa for this historical re-issue. 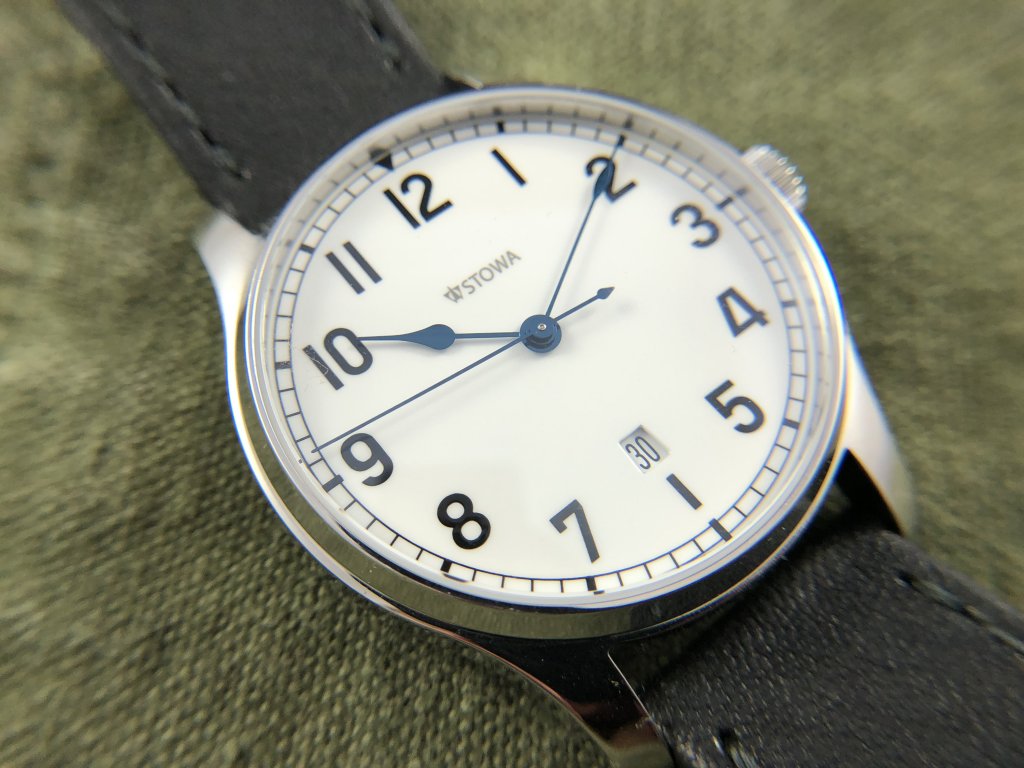 The Marine follows closely with Stowa’s overall approach to watch design. Classic forms inspired by historical references, simple and legible dial, and a focus on quality construction at a superb value. It’s not flashy, and it won’t likely draw attention at a cocktail party, but those are all part and parcel to why I think this is a great watch.

The design itself follows the stoic form of the 1939 Stowa Marine Chronometer very closely. The deep black arabic numerals, surrounding track, and steel blued hands are all prominent elements of the original design. In fact, the design of the hands appears to be almost identical. A beautiful and subtle ‘Poire style’ shape that evokes the spirit of these classic pocket watches. The steeled blue color appears as the hands catch light at the right angles, making the dial a bit more dynamic that it initially appears.

The second hand is impossibly thin and sweeps smoothly to the outer edge of the dial. The counterweight also features a rounded arrow shape, interplaying nicely with the shape of the minute and hour hands.

The dial is printed, so it doesn’t offer much in terms of depth, but the printing is sharp and crisp and does have a bit of a reflective 3-dimensional effect when viewed from different angles. The date window is unobtrusive at 6 o’clock and framed with a trapezoidal window, a nice touch. The sapphire crystal offers a subtle dome, but it’s really only noticeable when looking directly at the side of the watch. 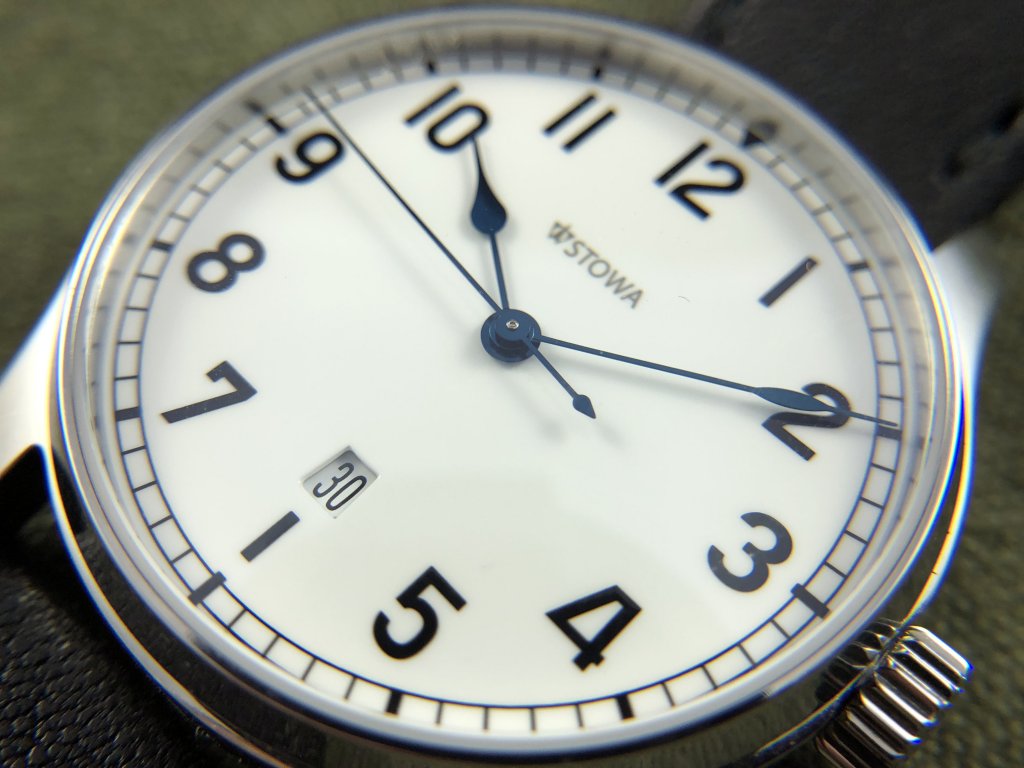 For those who appreciate the finer points of watchmaking, the steel blued hands provide a point of pride. Whereas many low-cost modern watches use a simple, cost efficient method of producing this effect, the traditional technique of tempering this material is time-consuming and complex, and executed by Stowa flawlessly. In normal conditions they appear deep black, but glow a reflective azure when exposed to direct sunlight. It’s a subtle effect that must be seen to be appreciated.

The case itself is polished steel, giving it much more of a dressy vibe than the tool watches I’m used to reviewing on this site. Marine watches are a style that straddle between dress and casual, and this one in particular is very versatile. For those looking for more of a toolish vibe, the watch can also be ordered with a matte case and onion crown for an additional 160 euro.

The lugs curve parabolically around the wrist, shortening up the lug-to-lug width to just below 49mm. The dial is encapsulated in a beautiful steel bezel that slopes dramatically into the case, allowing a sliver of the case underneath to perfectly frame the dial. The crown is signed with the Stowa logo and matches the cases polish, and sits snugly against the case without crown guards.

In terms of size, it’s not massive at 40mm, but it’s not exactly great for small wrists either. It’s all dial, and the provided leather strap would not even fit snugly on the last hole for my puny extensions. I will say though, Stowa has a fair amount more customizations that most watchmakers, and I wouldn’t be surprised if they would add a hole to your strap upon request and purchase. If you’re wrist is under 7”, I would try one on in person if possible (it’s probably not possible, since they only sell online). 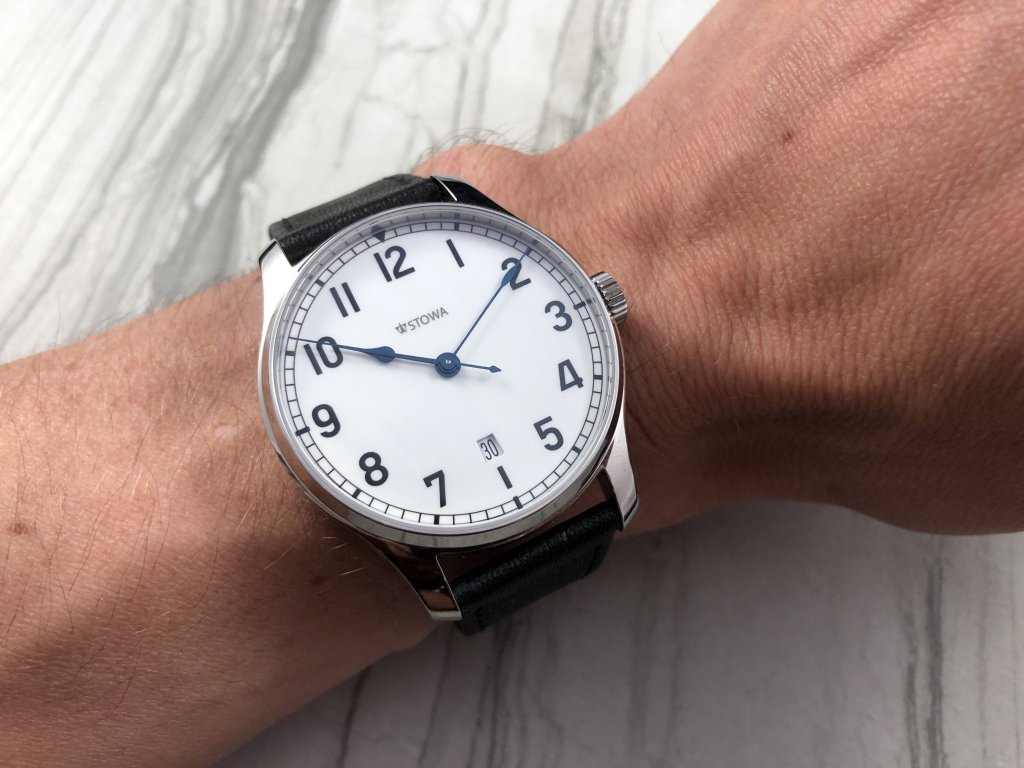 A few notes on the strap: The watch I’m currently reviewing has the matte black leather strap with black stitching. This appears to be the only option for the base configuration, but some of the others (like the Marine Original Silver) can be ordered with a black or brown Crocostrap or even a Milanaise bracelet.

The black strap has a taupe backing stitched to the underside, and both pieces are embossed, with the Stowa logo and “Since 1927” placed on each side respectively. The buckle is also signed, making this basic leather strap a bit more interesting than your run of the mill accessory. It’s a nice basic strap, although nothing particularly remarkable. 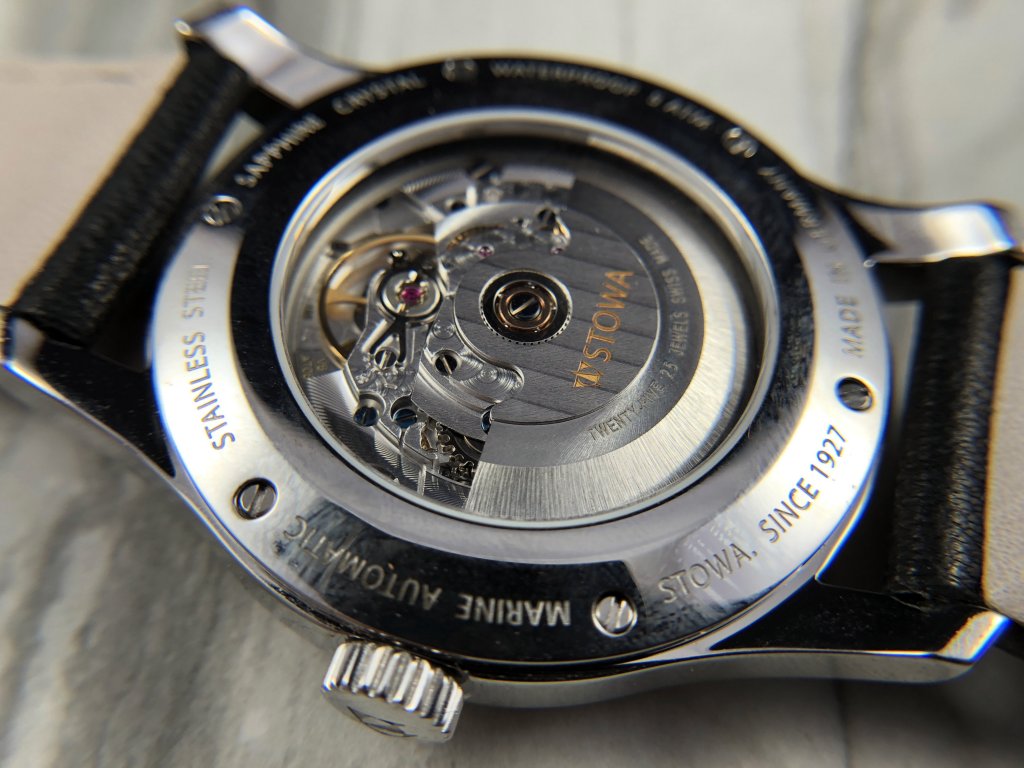 The stock basic version of this watch ships with the ETA 2824, a standard work-horse that’s been covered to death on this site. Of course, in typical Stowa fashion this movement is beautifully decorated, showing off its heat blued screws and well-finished rotor through the sapphire caseback. Did you know Stowa will custom engrave the rotor to your specifications? It’s not something I would do, but it’s a nice piece of customization if you’re looking to make your watch one of a kind.

For an extra 110 Euro you can upgrade to a top-grade ETA 2824. The key components which differ at the line of demarcation between Elaborated and Top are the barrel spring, shock protection system, pallet stones, balance wheel & hairspring and the regulator mechanism. These add up to a bit more precise timekeeping and a tad more horological pride, but overall don’t change much in terms of the wearability of this piece.

More interesting perhaps, is that you can also get this watch with a hand-wound ETA 2804-2. For those looking for something a bit closer to the original deck watch lineage, this might be the most desirable configuration.

For those looking to add a marine style watch to their collection, this Stowa just might be the ticket. With its roots in German naval history, a fantastic legible design, and a high-quality and beautifully decorated movement, the Stowa Marine ticks a lot of boxes for a versatile, everyday watch.

There a lot of variations to this piece, including a “silver” dial version that uses the actual metal in the dial fabrication. And the version with the sub seconds dial at 6 o’clock is worth a look too. At under $1500, it’s a great value for such a well-made piece. 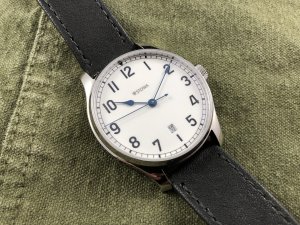 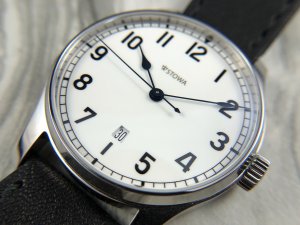 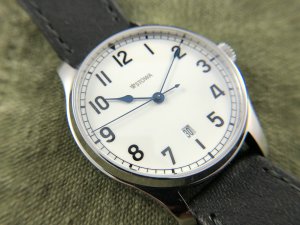 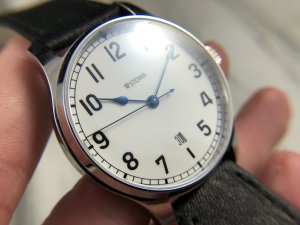 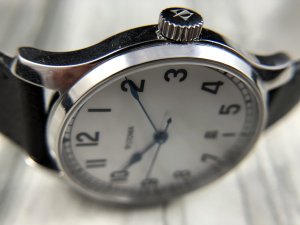 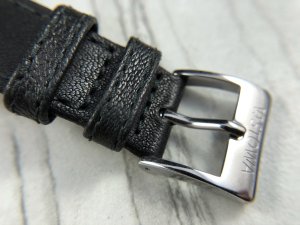 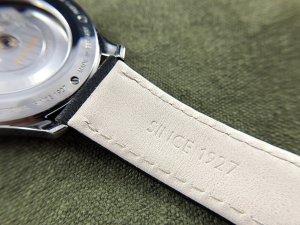 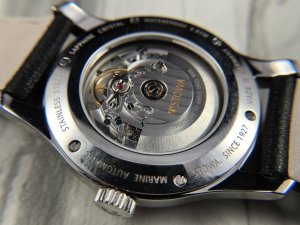 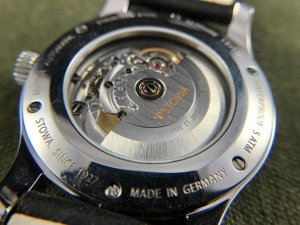 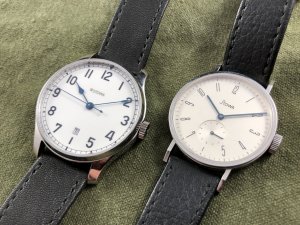 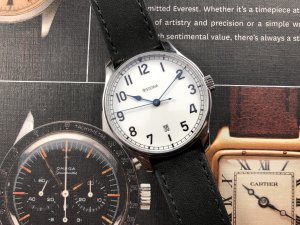 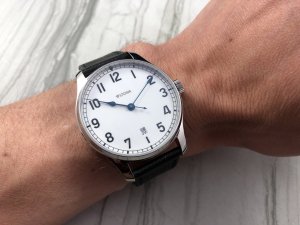