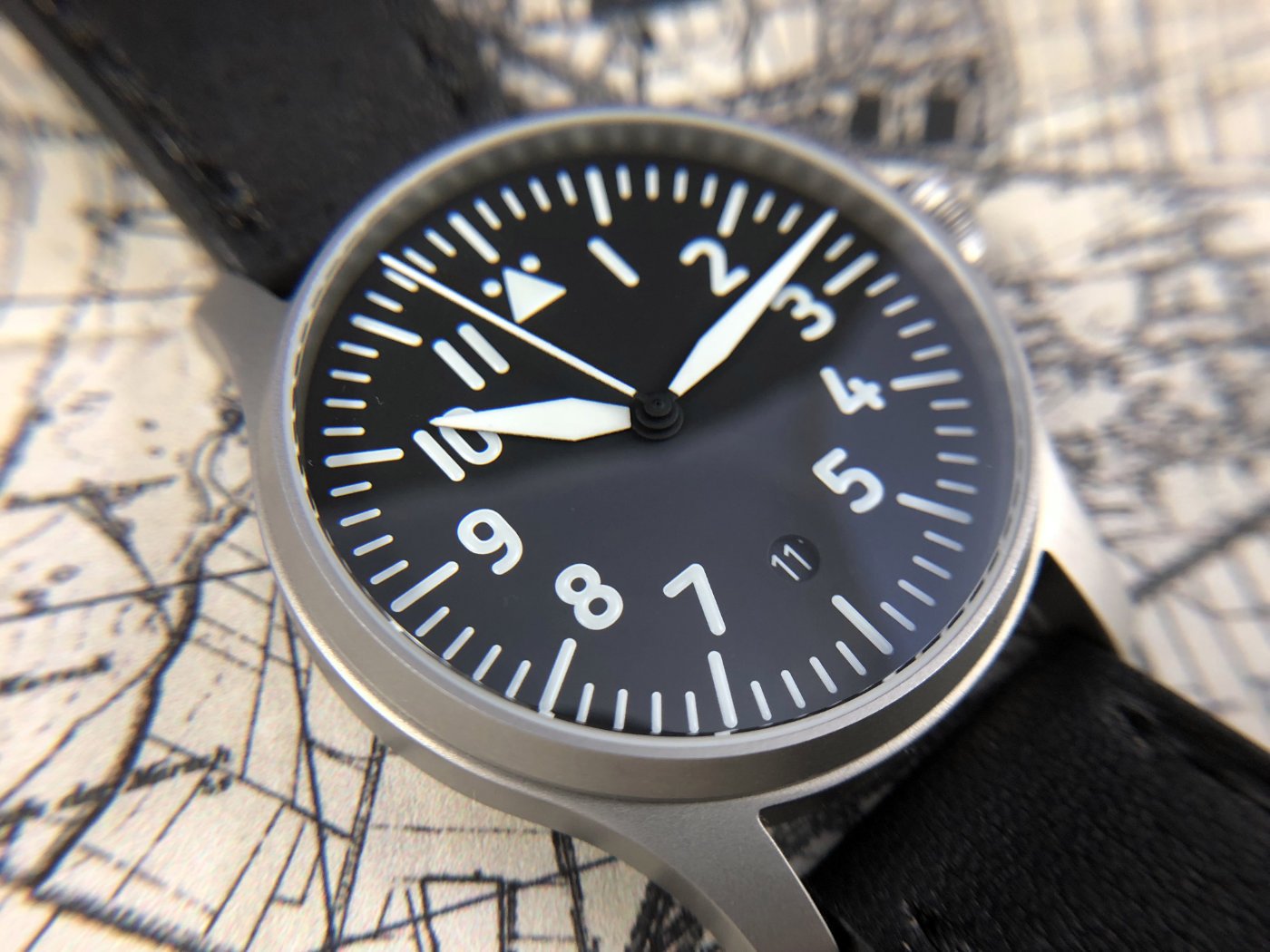 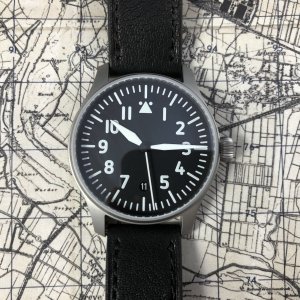 Of the most iconic military watches in world history, the German Flieger Type-A might be the most influential and recognizable. The original manufacturers of this design – Stowa, Laco, IWC, and A. Lange and Sohn – are still producing it, and dozens of other watch brands have taken elements from this classic pilot watch design and integrated it into their own models. A quick Google search will yield hundreds of examples, from cheap Canal Street knockoffs to 5-figure Swiss homages.

Stowa’s current catalogue of German flieger watches is prolific. Both the original Type-A and the more intricate “Baumuster” Type-B are well represented, with dozens of variants and colors to choose from. Within that stable, nearly all of them are faithful recreations of the of the design that was first introduced during WW2.

So when I heard Stowa was releasing a new line of entry-level Fliegers that re-imagined this historically important design, I was quite surprised. It’s not common for a company like Stowa to change the formula that’s been working for almost a century. 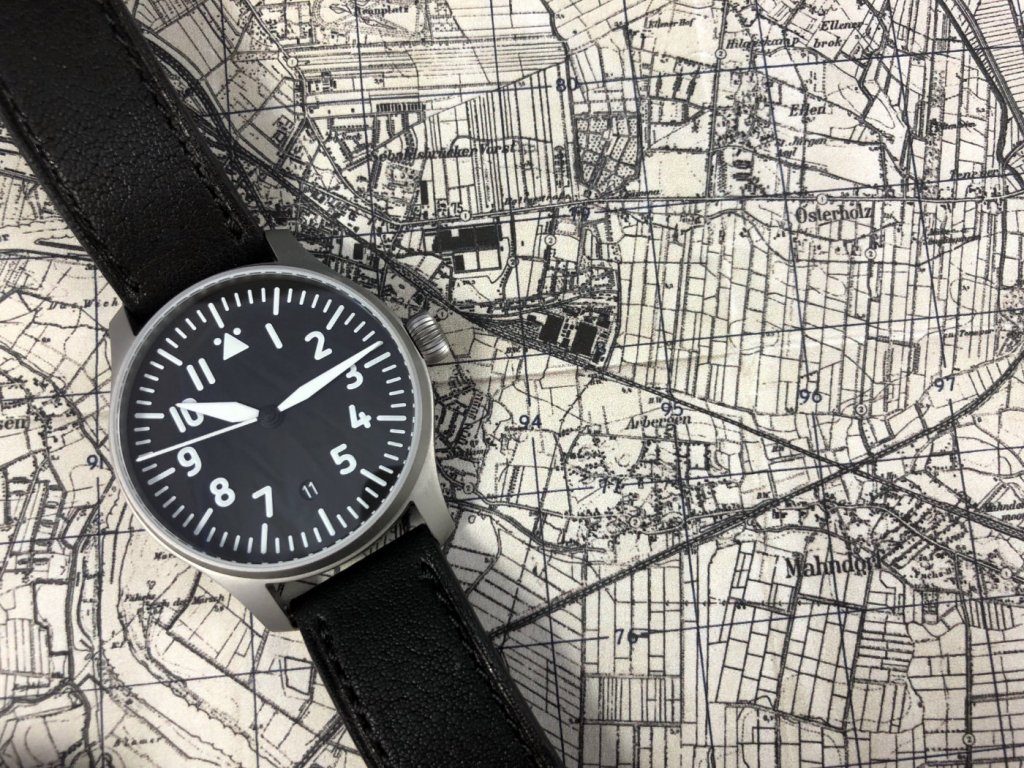 But with this release, Stowa hasn’t thrown away the design elements that make the Flieger Type-A such a perennial best-seller. Instead, they took the core elements of the original watch, remixed the proportions and the typeface, and created a watch that feels more like a modern iteration than a complete overhaul.

The result is a polarizing watch that will likely have as many critics as it does fans. While it does feel very much like a German Flieger, it also feels like something new – an accessible watch that looks both bold and understated. A tribute to both Stowa’s military history and the influence of Bauhaus in many of their early watch designs.

I’m not going to deep dive into the history of the German Flieger, I’ve covered it fairly extensively in some other posts like my review of the Stowa Flieger Baumuster and my article detailing the watches of World War II. But for the sake of completeness, I would like to reiterate a few things.

The flieger is well-known for its role aiding the German Luftwaffe during WW2. A pilot’s watch at its core, it expressed many of the elements that made it such an effective navigational tool – extreme readability, anti-magnetic shielding, and precise chronometer grade movements. In 1941, the “Type-A” dial was introduced, and a couple of years later, the “Type-B” superseded it. The exact reason for the redesign is debated, but many people believe it was redesigned to improve readability.

Of the five original manufacturers, four of them are still producing a Flieger-styled pilot’s watch. Stowa has been continually producing this watch since 1939, and for people who care about history and authenticity, this matters a lot.

Aside from being massively down-sized from the original 55mm case, the design hasn’t changed much over the years. Similar to the American GG-W-113, this classic military-spec design was too perfect to modify.

That was until today, with the release of the new Stowa Flieger Verus, we’ve got one of the original Flieger manufacturers introducing a new take on the Type-A. A playful remix that preserves the elements of the original while imbibing a fresh and modern feel.

The Stowa Flieger Verus is a bold re-interpretation of the German Flieger Type A, the first design iteration of the iconic pilot’s watch produced for the German military in the early 1940’s. Stowa took the primary elements of the Type A design – White and black arabic numerals, sword hands, a bead-blasted case with an onion crown – and amplified it. The result is an incredibly simple, modern watch that still feels very classic.

On first glance, the most striking feature of this watch is the arrangement of the sterile dial. The numerals are proportionally much larger than the original design, and as a result they crowd in towards the center of the dial. And although the case is actually measures 40mm, it does give the visual impression of being a smaller watch. The typeface is rounded and soft, but also very bold. The whites are super crisp, and the contrast between them and the black dial makes the watch extremely readable. 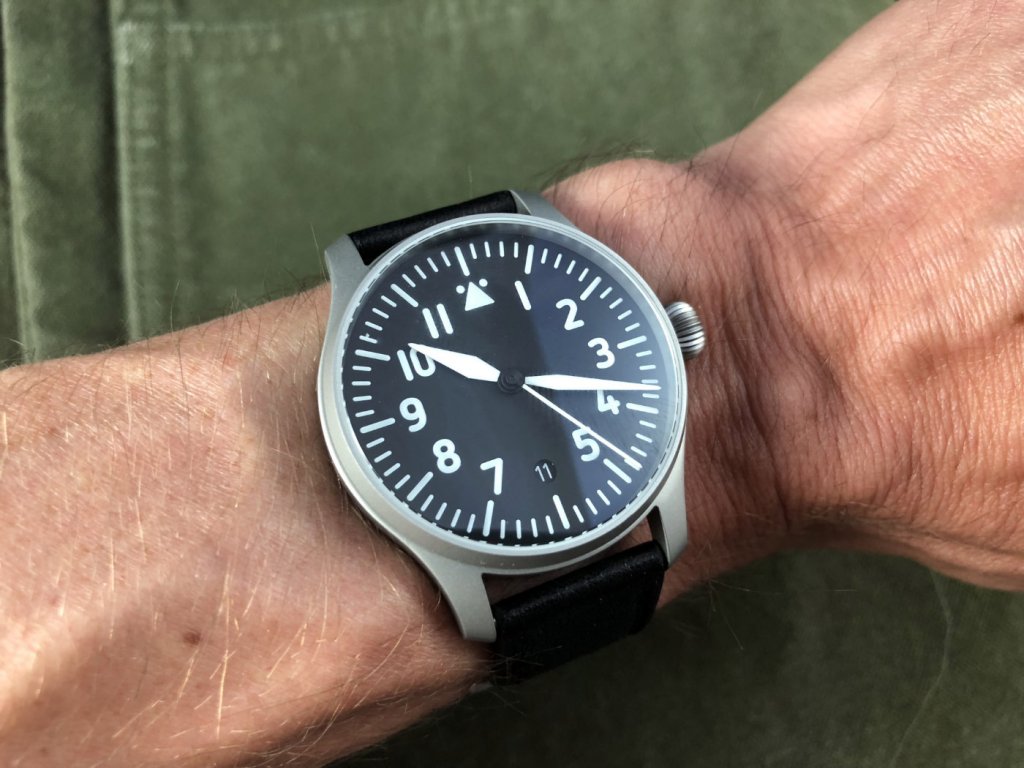 As far as modern touches, I think my favorite detail is the design of the seconds hand. Most fliegers (including the other models in Stowa’s portfolio) have a counterbalance on the seconds hand that extends just beyond the center of the watch. This is sometimes blue (to match the blued hands), or black to blend in with the background of the dial. In this case, it was removed entirely. This simplification makes it appear as if the hands are coming out of nowhere, as the center of the watch is pitch black, tying together all of the moving elements onto an invisible pin.

The case itself is bead-blasted matte steel, colored a gunmetal gray that resembles titanium. It’s a perfect finish for this watch, and one that stays true to the flieger military aesthetic. At 40mm, I dare say it’s the perfect all-around size for a sports watch. It’s thin too, and the flat crystal makes the whole package hug the wrist closely.

This is likely to be a polarizing design for Stowa. Although it retains enough of the classic Flieger elements to appeal to purists, the ultra-modern re-interpretation might not be for everybody. Even though the classic Flieger Type-A design is known for its simplicity, Stowa has somehow made it appear even simpler, and by increasing the proportions of everything on the dial, it does take on a bit of a “toy-like” quality that is hard to quantify.

Night visibility of this watch is extremely good. Increasing the boldness of the markers actually has the side-effect of increasing the area in which the lume is applied, and compared to a similar pilot watch like the Sinn 556, it is a far superior option. 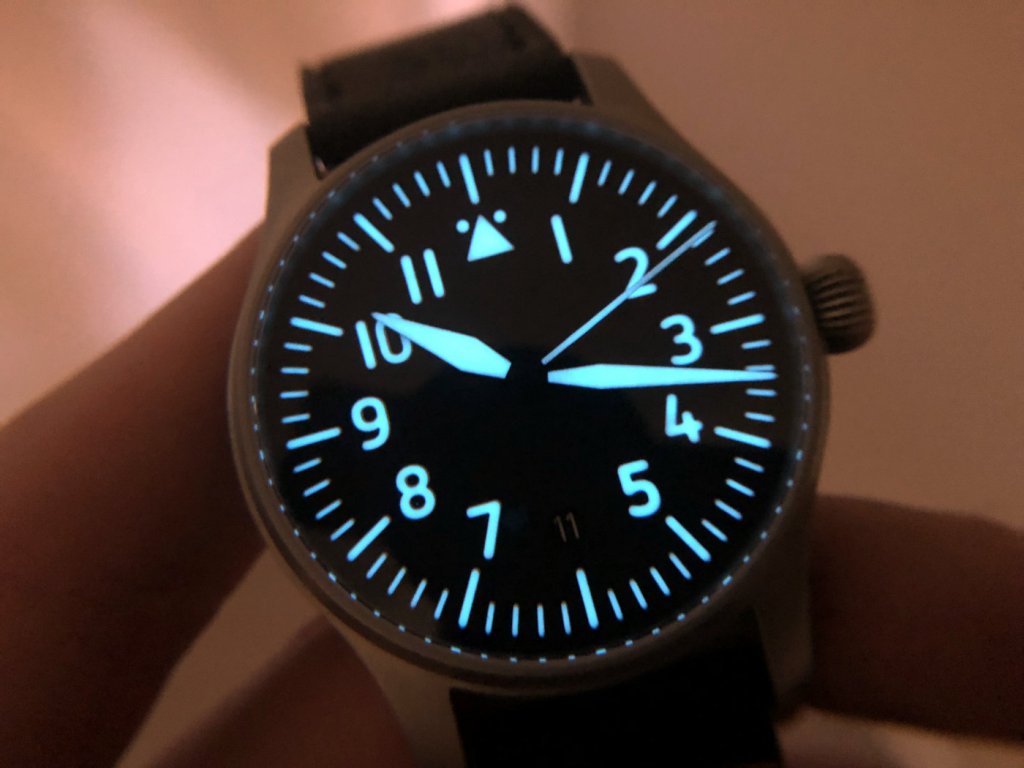 The watch comes available with two straps options, a black on black leather strap and a steel milanese strap. The black leather strap is very basic, yet high quality, and appears to be similar to the straps offered on many other Stowa models like the Antea. It would have been nice to see some pilot details on the strap, like contrast stitching or bead-blasted rivets, but I guess that would go against the extreme simplicity of the rest of the design. The Milanese strap looks interesting, and would be a nice option for those looking for something a bit more dressy.

The Flieger Verus is available in both hand-winding and automatic configurations. This particular model has the ETA 2804-2, which is the date variant of the popular 2801-2 handwinding movement. Like almost all Stowa watches I’ve reviewed, the well-decorated movement is displayed beautifully through a sapphire caseback. There is such a stark contrast between the simple, utilitarian design of the dial and the intricate details of the movement through the back, it’s a joy to flip over every once in awhile just to experience. 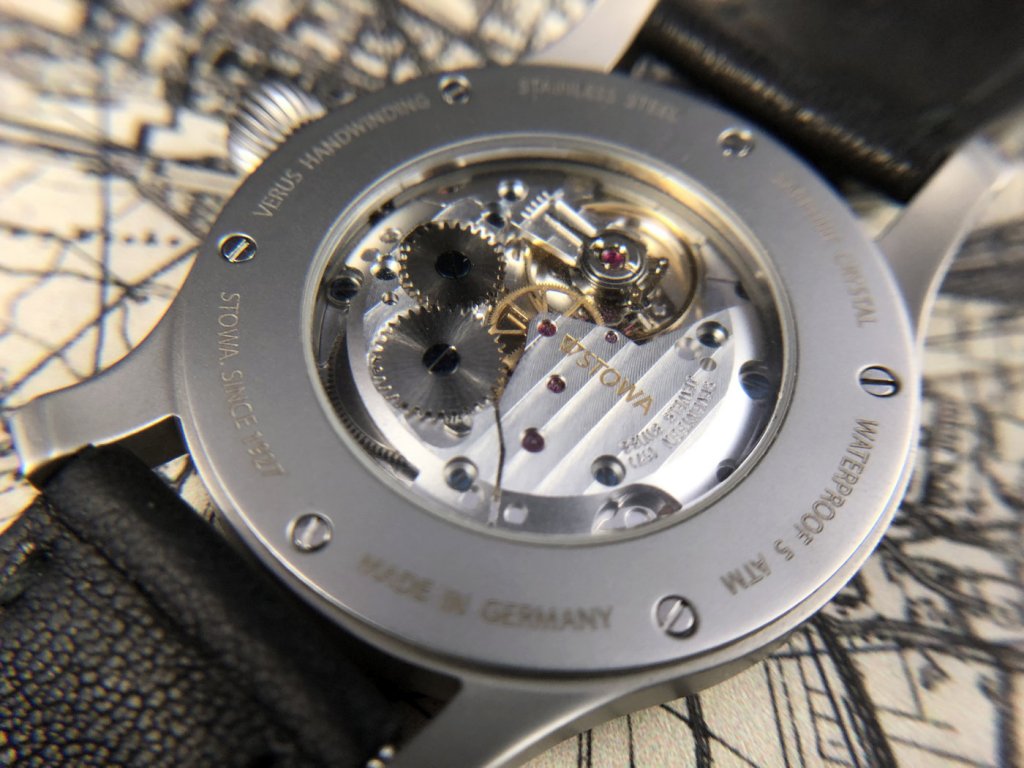 Although the handwinding version is roughly 130 Euros more than the Automatic, I’d say it’s a very worthwhile upgrade for this model. Not only is the handwinding of this watch more true to the flieger bloodline, the lack of rotor exposes more of the beautiful components inside of the movement.

For fans of this movement looking for a cheaper vintage military styled alternative, look no further than the Hamilton Khaki Mechanical. It’s about half the price and contains the same ETA hand-winder inside, although you won’t be able to admire it through the solid caseback.

It’s worth noting that of the two automatic ETA 2824-2 options available, there is also the option for a “top-grade” ETA movement. This movement has a much higher level of finishing, and if admiring movements is your thing than it may well be worth the additional 100 Euros.

Will everyone love the new Stowa Flieger Verus? Most likely not. It’s enough of a departure from the classic military look of the Type-A Flieger to put off purists. But for those looking for something different, or something a bit more affordable, the Verus is an excellent introduction to the Stowa brand.

And as far as Type-A pilot watches go, the new price-point of the Verus makes it extremely competitive in the realm of Swiss-made entry level pilot-watches. And truthfully, there is nothing else that looks quite like it on the market. It’s a unique design from a historical manufacturer, and for fans of the brand and military watches alike, it will likely be a welcome addition to the watch box. 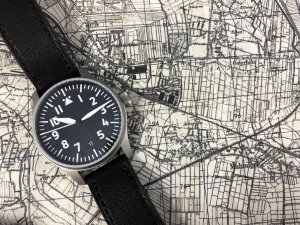 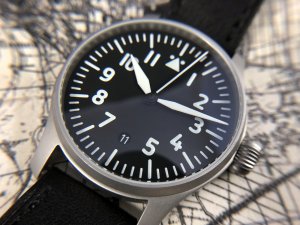 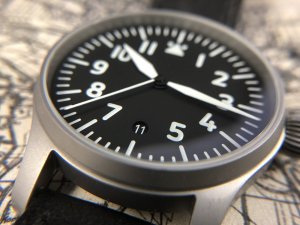 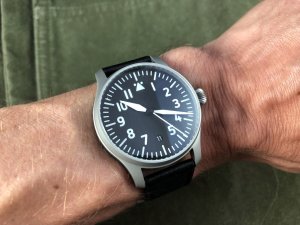 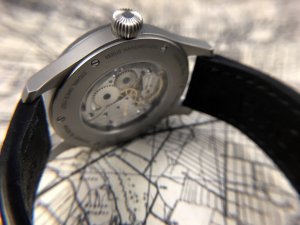 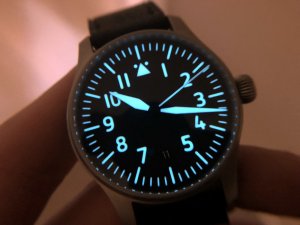 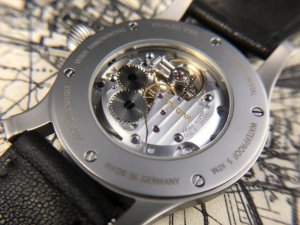 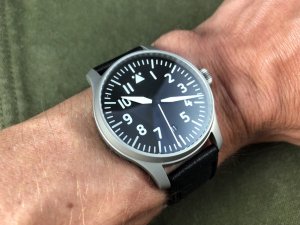 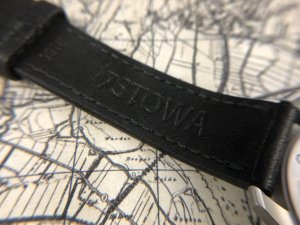 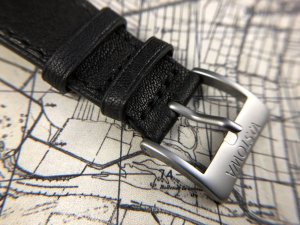 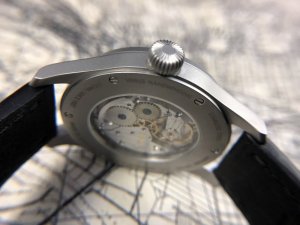 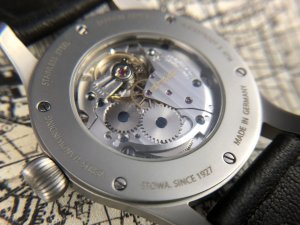