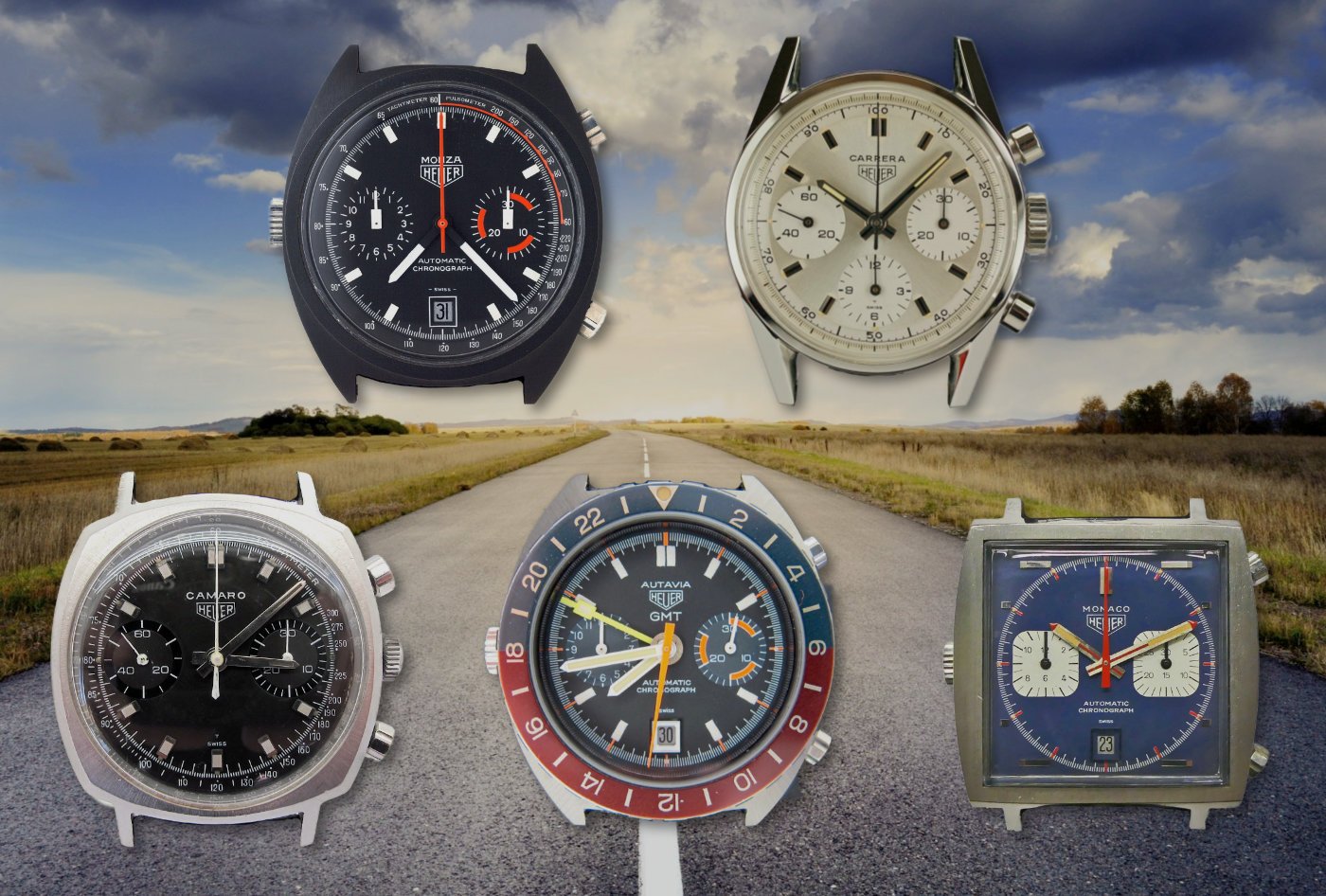 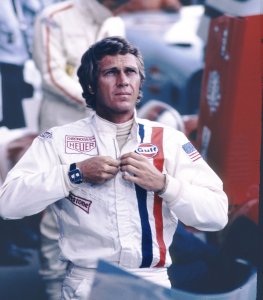 Modern day Tag Heuer gets a bad rap. I’m not sure where it started, but at some point the collective WIS community decided that Tag Heuer’s were an over-priced and over-marketed mall brand worn by dude-bros whose collections consist primarily of cheap fashion watches and oversized submariner imitations.

But prior to the merger of TAG (Techniques d’Avant Garde) and Heuer in 1985, this innovative company was building some of the most iconic racing chronographs in horological history.

Under the helm of Jack Heuer, the company infused it’s love of automobile racing and precision timekeeping to produce such icons as the Carerra, the Autavia, and the Monaco – a watch famously worn by Steve McQueen in the 1971 film Le Mans.

While in some ways the characterization of modern day Tag Heuers may be justified, there is a reason for their popularity. They are an accessible brand that have name-recognition amongst the general population, even if some simply buy them for the status they perceive to gain.

But you can’t deny the real history of the brand, and vintage Heuer chronographs are some of the most highly coveted and collectible watches you can find in the collector communities.

Today we’re going to look at some of the vintage chronographs Heuer produced during the mid-century that continue to appeal to modern day enthusiasts and motorsport fans alike. 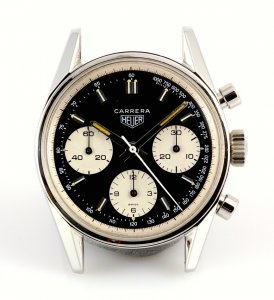 Any discussion of vintage Heuer chronographs must begin with Heuer’s most recognizable chronograph – the Carrera. First launched in 1963, the Carrera is an icon of the Heuer brand. A classic design with three subdials and a demarcated chapter ring, the Carrera might be the purest expression of the vintage racing chronograph – clean, legible, and functional – like the cockpit of a vintage Porsche 908.

Named after the legendary (and deadly) Mexican motorsport event, the Carrera Panamericana, this chronograph’s design was clearly influenced by the mid-century modern design movement. Notable mid-century designers and architects, like Charles and Ray Eames and Brazilian architect Oscar Niemeyer, were known to be highly admired by the Heuer CEO.

Early Carrera’s are actually quite similar to the early Rolex Daytona. With dials produced by Singer and movements supplied by Valjoux, the two watches are nearly identical from a production standpoint, even though their price points differ by a factor of 10.

The Carrera enjoyed continuous production through the late 1970’s until it succumbed to the encroachment of the quartz revolution. Reintroduced by Tag as a one-off in 2004 to highlight the company’s heritage, the Carrera enjoyed immediate renewed success and can still be purchased today in a huge variety of configurations. 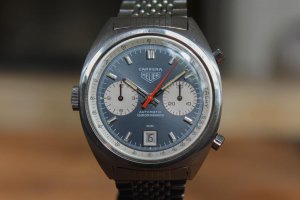 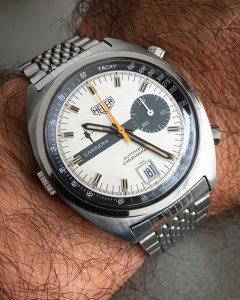 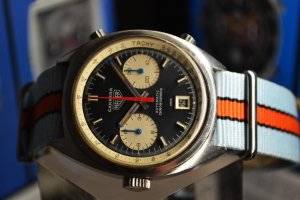 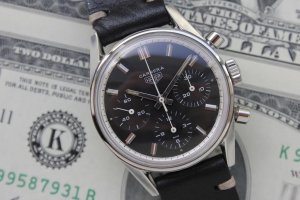 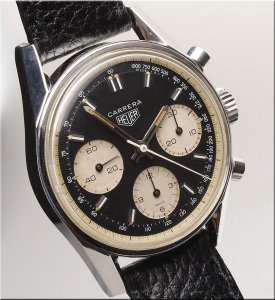 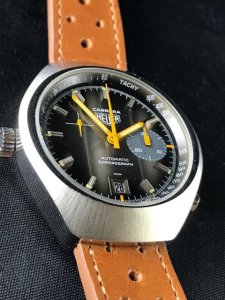 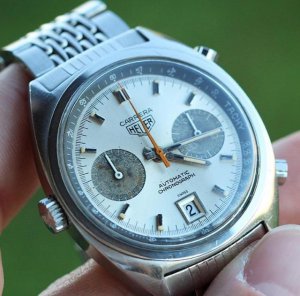 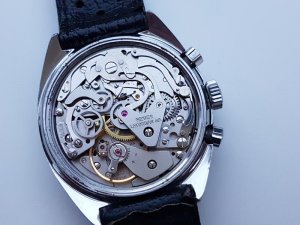 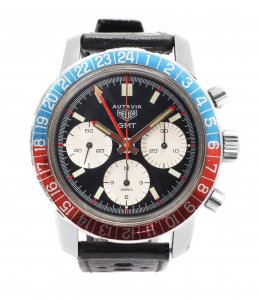 The Heuer Autavia shares much of the racing DNA found in the Carrera, but history shows that the Autavia was actually far more popular with actual race drivers. Giants of motorsports Mario Andretti and Jochen Rindt were both known to have worn manual-wind Autavias in the late 1960s, and the watch itself was incredibly useful for the drivers.

The name Autavia is a combination of the words Automobile and Aviation, a watch defined not only by it’s chronograph and timing features, but also by its rotating bezel (supplied in both Tachymeter and GMT variants).

In the 1970’s, Heuer introduced a compressor style case and dive bezel, making the Autavia a well-rounded sports watch that could be utilized by divers as well.

The first manual-wind Autavias were powered by Valjoux movements, with later automatic versions of the watch taking on the full range of Heuer’s Cal 11 movements and their derivatives.

All in all, the Autavia is a highly collectible watch, with vintage models showing a strong surge in pricing throughout the last few years. To add to the collectible appeal, vintage Autavias can be found with six case configurations, fourteen movements, and a wide range of bezels – accumulating to over 80 different expressions of the classic watch. 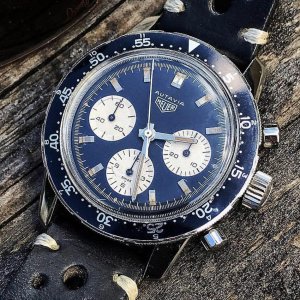 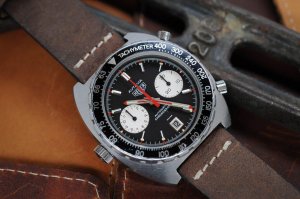 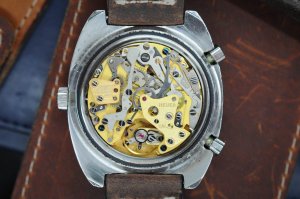 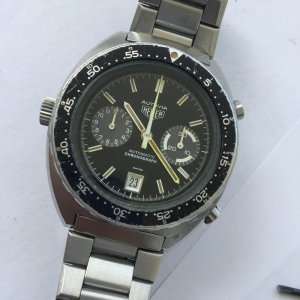 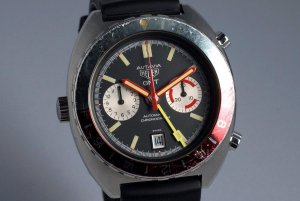 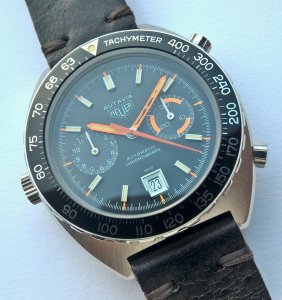 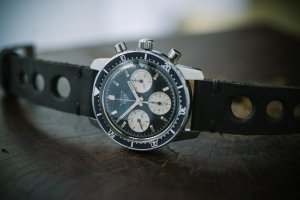 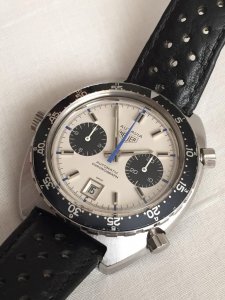 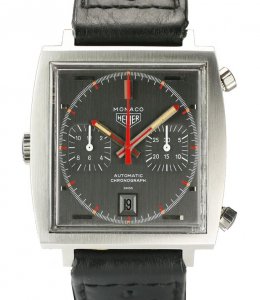 There is no mistaking the Heuer Monaco, it is one of the most distinctive chronograph designs of the 20th century.

Defined by it’s self-winding movement and striking square case, the Monaco is a truly unique piece of horological history. This was during a time period in watchmaking where cases and parts came from common suppliers and were nearly ubiquitous between brands. But Jack managed to secure an exclusive contract with case-maker Piquerez, giving Heuer an exclusive “avant-garde” design that stood out amongst its competitors.

Maybe best known for its iconic role in the film LeMans, the Monaco was worn on the wrist of by Steve McQueen himself. But it’s also known that the Monaco wouldn’t have been Steve’s first choice for the film, owing to the fact that most racers actually wore Autavias. It’s said that he settled for the Monaco simply because the movie’s propmaster only had three copies of this particular model, needing one for McQueen, one for photography, and a backup in case either broke.

Despite the drama surrounding McQueen’s “sponsorship” of the Monaco, it remains one of the most iconic watches of Heuer’s vintage catalog. In fact, the Monaco that McQueen wore in the movie was recently sold at auction for $650,000.

Another fun movie fact: fan’s of Breaking Bad may have noticed that Walter White wears a blue Tag Heuer Monaco in Season 5, episode 4, a gift from Jesse Pinkman for Walter’s 51st birthday.

Luckily, the Monaco was reintroduced in 1998, and for those interested in purchasing the diminutive square icon, it can be readily purchased at a Tag AD or on the secondary market. 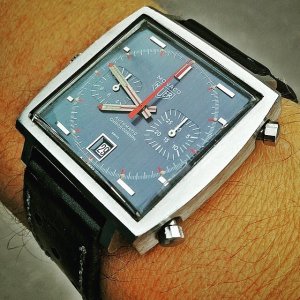 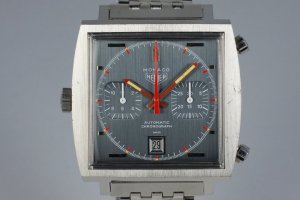 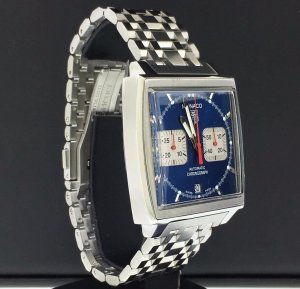 The world of vintage Heuer chronographs is massive. Although the Carrera, Autavia, and Monaco are the big three and the most desirable of the early chronographs, Heuer released dozens of other highly collectible models throughout the 60’s and 70’s.

From the svelte Camaro (a watch designed to improve Heuer’s presence in the U.S. market) to the Oddball Calculator (a watch with a massive slide-rule bezel), the world of vintage Heuer chronographs is incredibly enticing for the budding collector and tool-watch enthusiast.

And even though Tag may have lost their luster with the emerging watch-snobs and WIS’s of our community, you won’t find many dude-bros wearing a vintage Monza or Heuer Kentucky anytime soon.