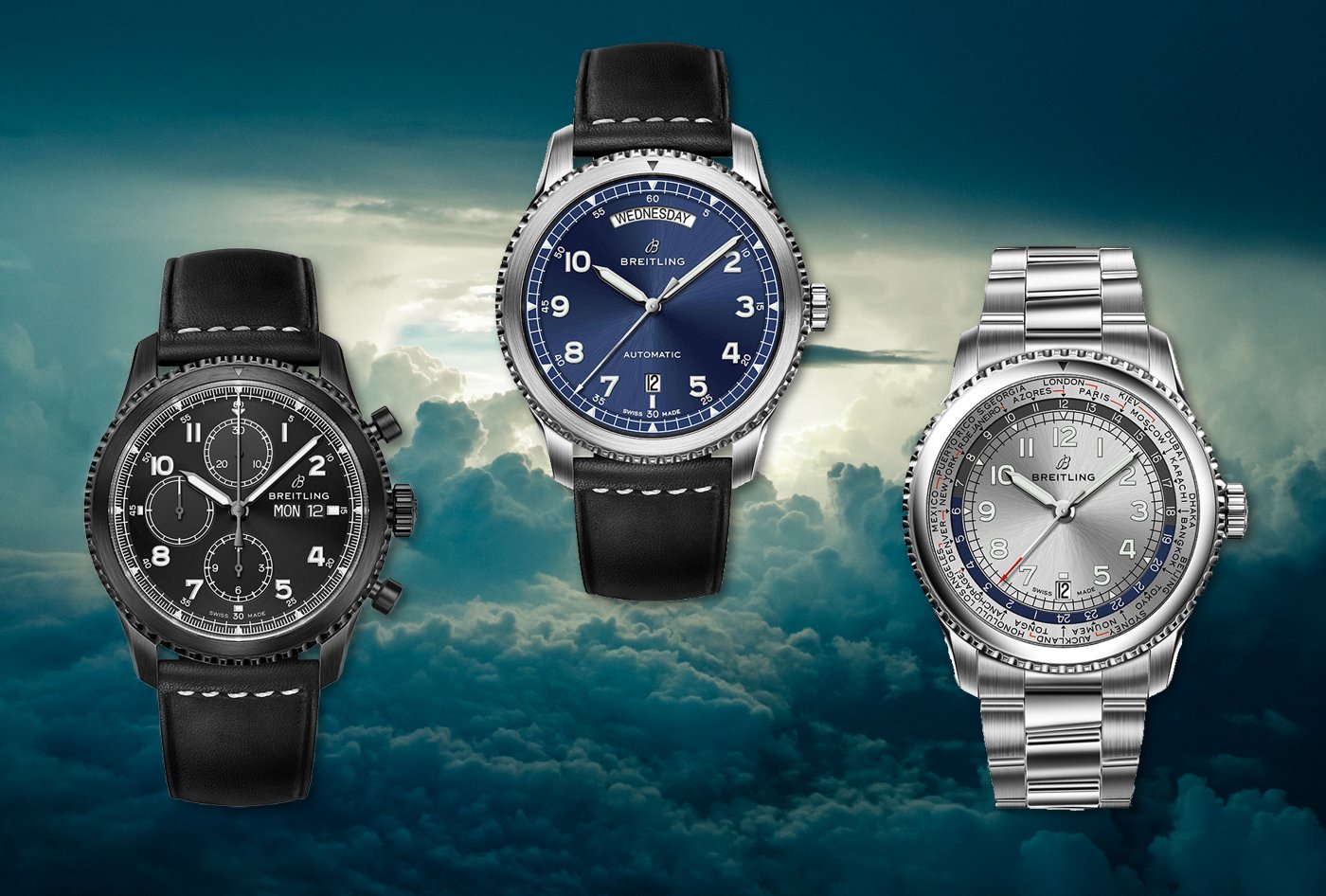 What image comes into your mind when you hear the words, ‘tool watch?’

For us here at 60Clicks, like for most, the words often conjure up images of tough-as-nails dive watches. Hard working, tough looking, no-nonsense, “everything you need, nothing you don’t” timepieces which SCUBA divers once used to not die in the ocean depths.

But aircraft pilots are fond of not dying too. And thus, the Breitling Navitimer was born. Its slide rule bezel could be, indeed was, used to calculate every quantity a pilot needed to get to their destination safely, from fuel consumption to rate of climb to air speed to estimated time of arrival. My cousin was once a USAF test pilot who loved his Breitling for just that reason.

300 assorted Breitling fans, collectors, dealers, and journalists found out just what Breitling plans to do, at a Black Tie soirée in New York a few weeks ago, hosted by none other than Georges Kern himself, the newly installed CEO and majority stockholder of Breitling.

The third stop on a world tour, the New York introduction for the new Navitimer 8 featured several celebrities. The astronaut Kelly brothers, Mark and Scott, were there. The crowd – and Emcee Alex Moffat of Saturday Night Live fame – did not fail to notice the uncanny resemblance of Mr. Kern to the highflying brothers Kelly. Even Kern himself got in on the fun, quipping, “triplets, separated at birth.” 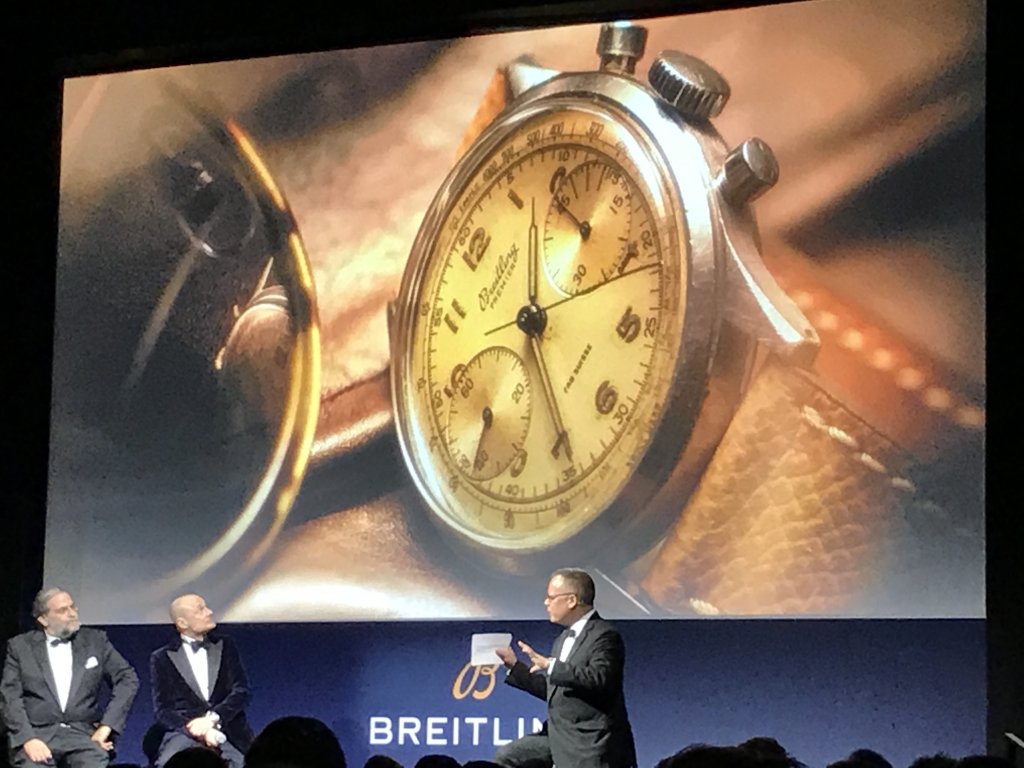 Olivia Munn and Armie Hammer were there too, as was Darren Criss from the TV show “Glee.”

And so the famous and not so famous listened eagerly while Mr. Kern told us what to expect for the future. In turn, he was joined by Hodinkee Editor-in-Chief Jack Forster, and Breitling super-collector Fred Mandelbaum (WatchFred in the forums and on social media).

And at the end of the speeches, the crowd duly filtered into another part of the auditorium where the new watches were on display. And a secondary treat was the good chunk, if not all, of Mr. Mandelbaum’s private collection of vintage Bretlings. The more to whet the crowd’s appetite for future releases? No guarantees were issued, but the hints were certainly there.

But the new line? Where did it come from?

What About That Cockpit Instruments Thing? 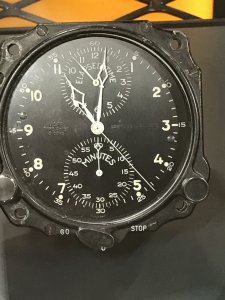 Turns out that decades ago, Breitling also made cockpit instruments and timekeepers. And those venerable instruments of yesteryear inform the new Navitimer 8 aesthetic.

You see, the Navitimer 8 was not born from a vacuum. Mr. Kern & Co. are looking to the brand’s products of the first 100 years for inspiration. And found it they did, in those old cockpit instruments – the Breitling 8 cockpit clocks, so-named for their 8-day movements and the engineering group from which they came.

And if it’s true that the first hundred years will inform the next hundred years, what might we expect in the next few years? I heard a lot of side talk from the black-tied and cocktail dressed attendees, hoping for smaller watches which mimicked old favorites like the 1940s Chronomats and Datoras.

But back to the new Breitling, now operating for the last nine months with Kern at the helm.

Kern himself said Breitling’s watches have, in many cases (no pun), become too big and too shiny – and too visually complicated. It’s time to rein them in. Brand faithful might understandably be concerned at that last statement, especially those who crave the tech-toolish slide rule look of the Navitimers. But fear not – the Navitimer with the slide rule bezel is here to stay. The Navi8 is an addition, not a replacement. It does however, as the name implies, join the Navitimer family.

The Breitling family had also become too large, according to Kern. Somewhere between 800 and 900 references – far too many for a mere mortal sales person in an authorized dealer to have to deal with. And so that number will be reduced to around 160 references, a much more manageable number.

They’ll be bringing the average diameter of the lines down too, closer to 40 – 44mm, to appeal to the Asian market, and possibly to more women as well. So the huge watches, like the 50mm Avenger Hurricane released a couple of years ago, will be phased out. (This author confesses to hoping he can pick one of those up at a fire sale price at some point.)

Say adios to the lower end quartz pieces too. The new Breitling is all about analog mechanical, with a couple of high-profile exceptions. The Emergency stays, as does the Aerospace.

And in fact, there will be only four families going forward: the Navitimer, the SuperOcean, the Premier, and the Chronomat (yes, we see what Breitling did there – will the Chronomat collection be the one that houses some of those hoped-for retro pieces?).

The Navitimer 8 At a Glance 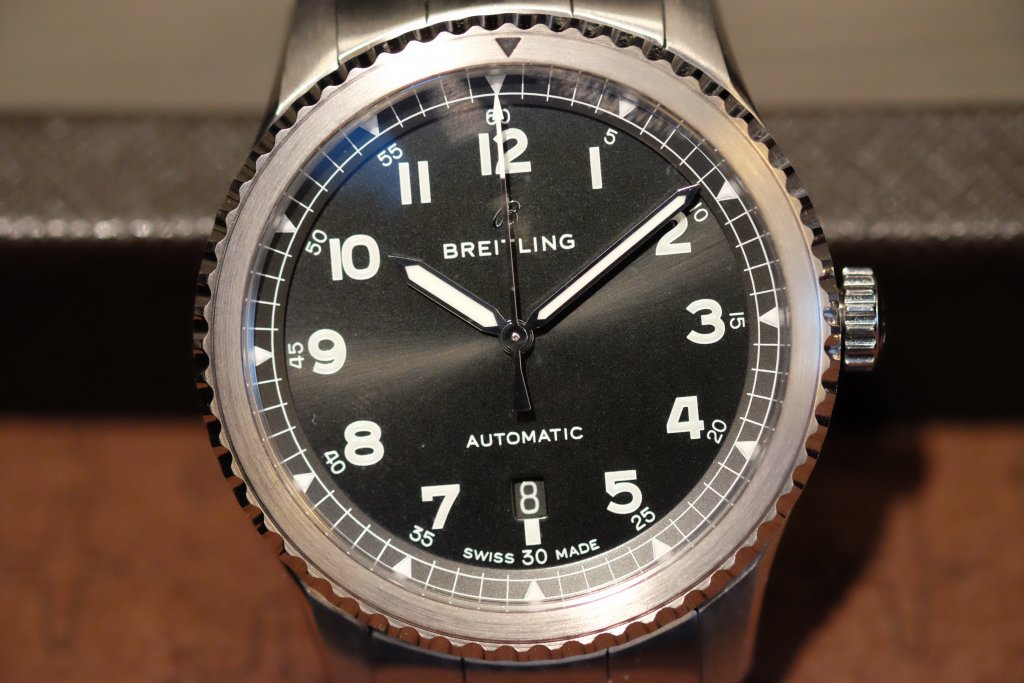 The Navitimer 8 spreads the calipers to 43mm in either chronograph or three-handed form. It will be available in steel, rose gold, and DLC versions.

B01 chronograph versions will be panda dials in the classic 3-6-9 layout while the dials of Valjoux-based models, with sub-dials that movement’s typical 6-9-12, will be tone on tone. This will enable the viewer to tell at a glance which motor purrs beneath the dial.

Dial colors will be black & white for the steel B01, bronze & white for the rose gold. For the Valjoux pieces, you’ll have your choice of blue or black for steel, and any color as long as it’s black for the DLC “Blacksteel” watch. 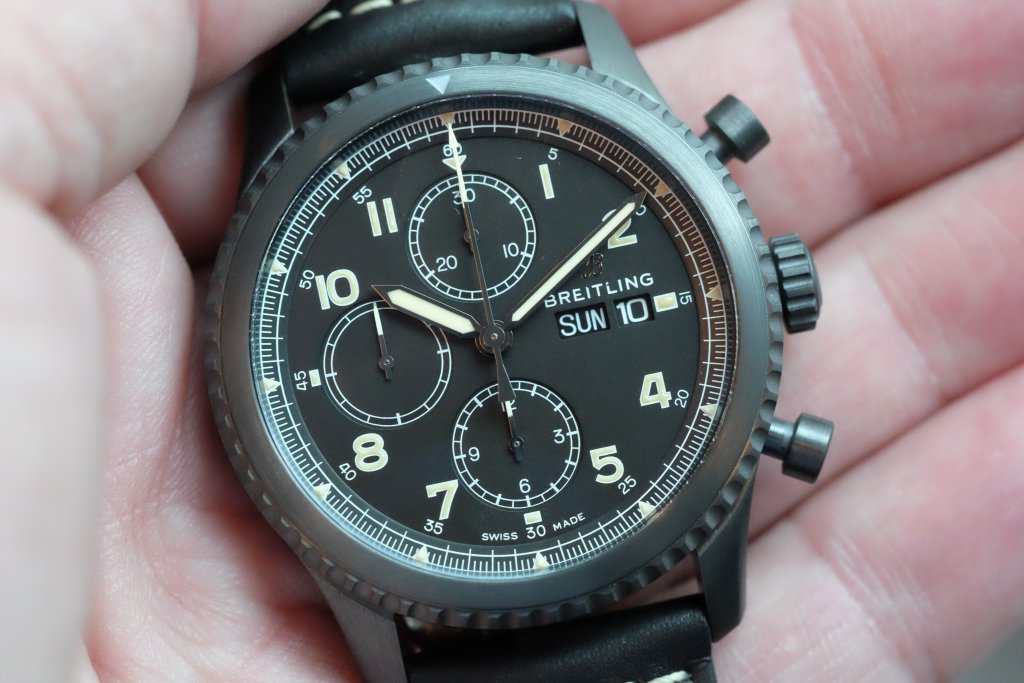 Notably, the Navi8 case, crown, and pushers have been engineered to earn a depth rating of 100 meters (water tightness has always been a concern with previous generations of Navitimers). The lugs are shorter that previous Breitlings, but follow from the brand’s design heritage. This makes the Navitimer 8 both recognizable as a Breitling, and suitable for a large range of wrist sizes.

Last, Mr. Kern announced several changes that fall into the category marketing. The logo has been updated. The flying B is gone, replaced by a simple but familiar cursive B with the word Breitling in sans serif font below. 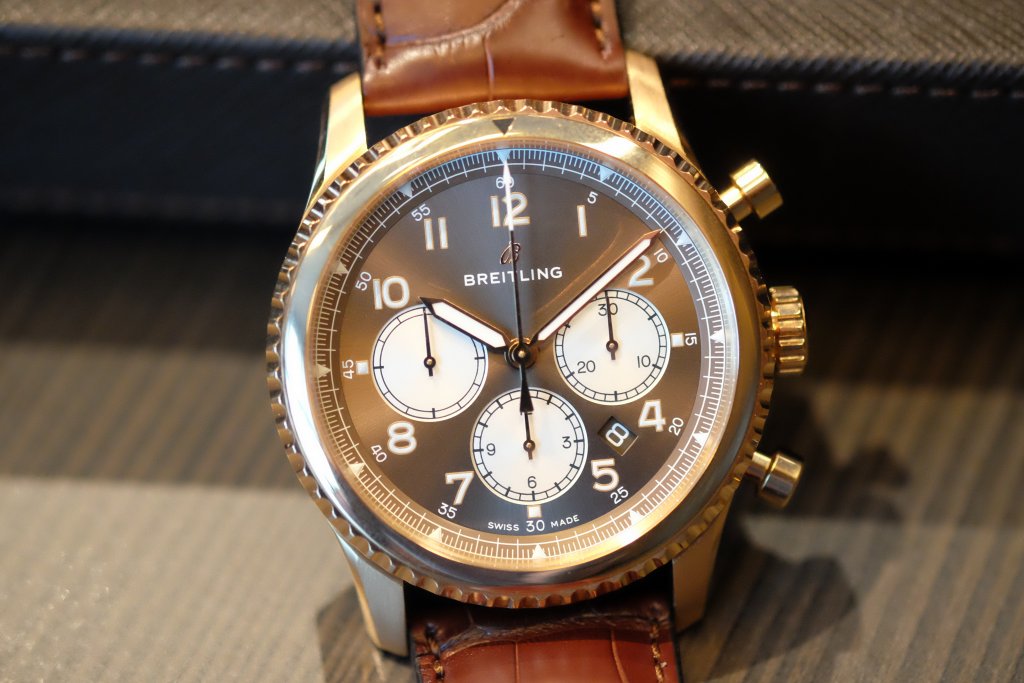 Boutiques will now be called lofts and have undergone a redesign of their interiors.

Last, Breitling is joining a host of current social movements by moving away from the dramatically sex-charged advertising images and store fixtures.

The Navitimer 8 is a modest, some say conservative start to the new era of Breitling that Georges Kern is ushering in. Simplifying the lines, and looking back to a rich past of respected, admired, and sought-after timepieces should make for in interesting future for a brand that is as popular and recognizable as any in existence.