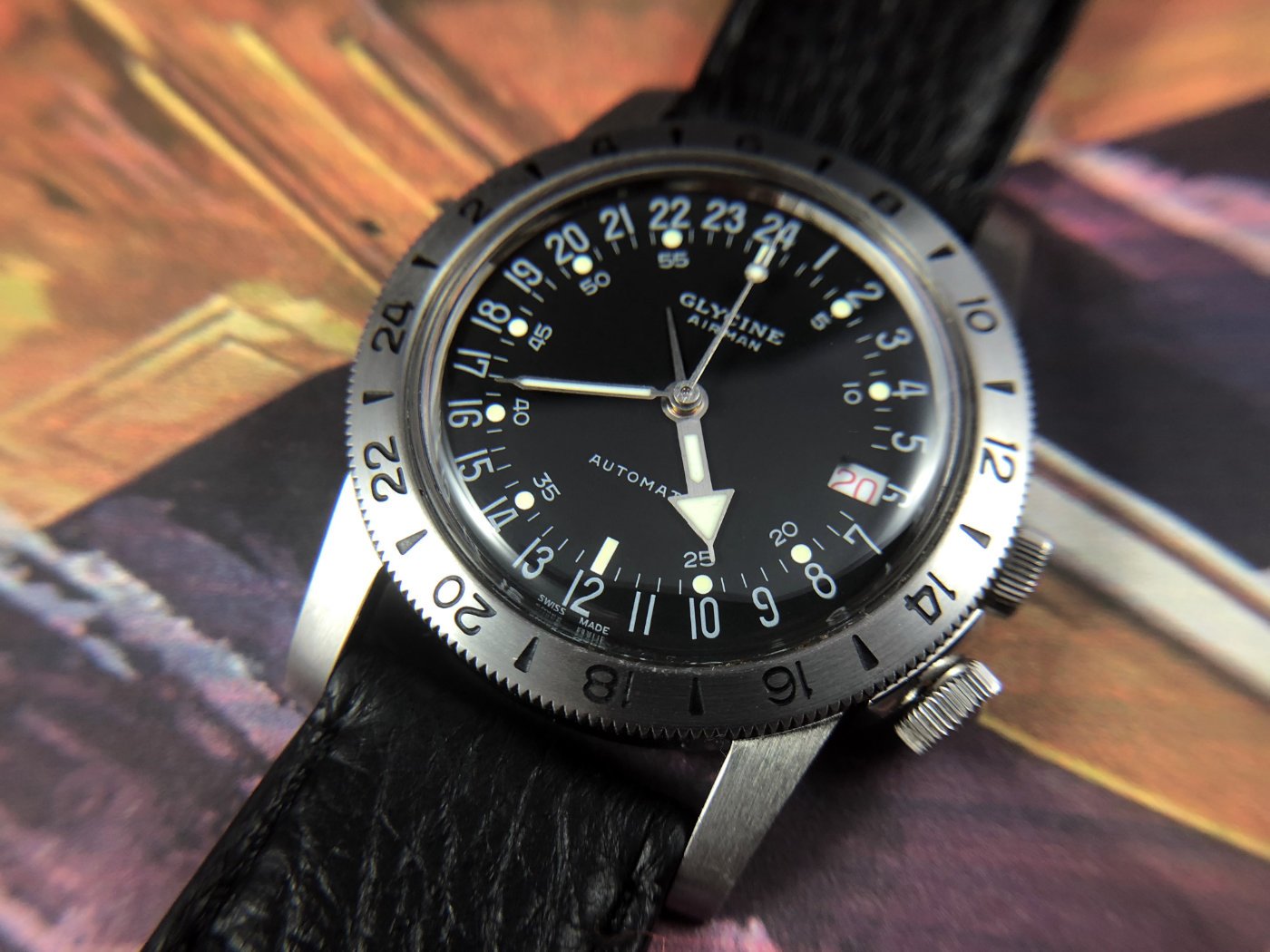 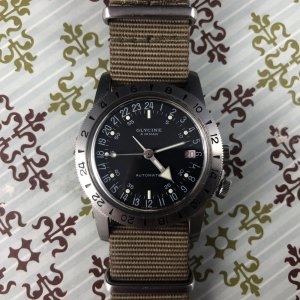 As the story goes: It was in 1953 when Samuel W. Glur, a sales director for Glycine-Altus, boarded a flight on Thai Airways from Bangkok to Calcutta. Upon striking up a conversation with the pilot in the cockpit, Samuel was able to ascertain the requirements for a watch built specifically for commercial airline pilots. What the pilot reported to Samuel seemed simple: an automatic, waterproof watch with a calendar and a 24-hour dial, with a rotating 24-hour bezel to track a separate time-zone – a watch that did not currently exist on the market. After touching down in India, Samuel immediately penned a letter to the owner of Glycine, Charles Hertig, describing the opportunity he saw for what would soon become an instant classic.

Charles himself must have been convinced, because just a few months later, a prototype for the Glycine Airman was born. With it’s innovate 24-hour dial and dual time-zone tracking capability, it became the watch that set the benchmark for a reference that would enjoy continuous production for the next 60 years. From U.S. helicopter pilots in Vietnam to commercial and recreational pilots, the Glycine Airman proved to be a perennial best seller, despite its niche appeal. 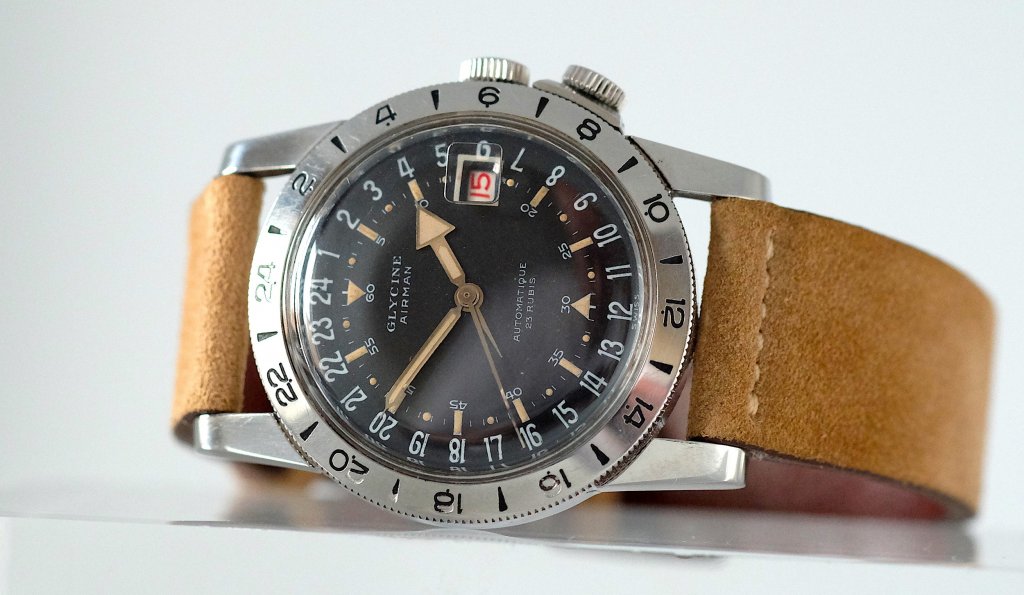 The Glycine Airman has evolved many times over the years, from the Airman “Super Sonic Transport” models of the 1960’s with their brightly colored internal bezels to the elaborate “World Timers” of the 1990s, the design has continued to change while the underlying DNA has remained the same. 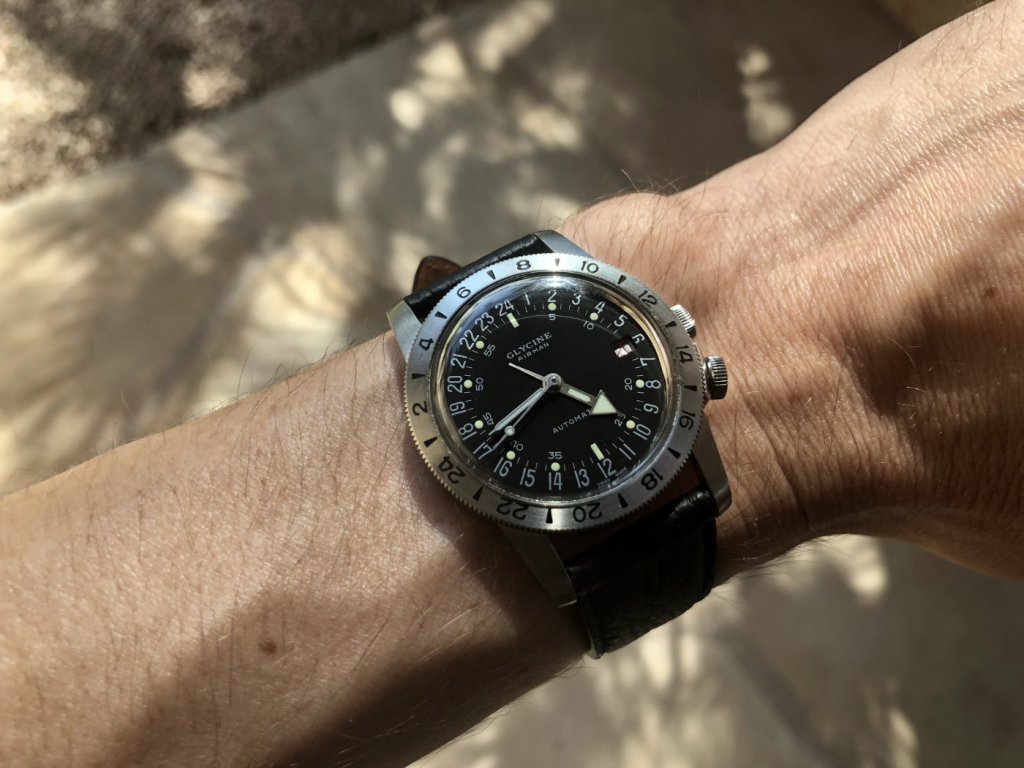 Wrist Shot of the Glycine Airman No. 1

Despite being branded as the “Airman No. 1”, this re-issue from Glycine is not actually based on the first iteration of the watch. The first design of the Airman was created in 1953, and known by collectors as the “AM/PM”. It featured the signature 24 hour dial, but had dauphine hands, and markings for “AM”, “PM”, and “noon” on the dial. It wasn’t until a few months later that the design of the Airman changed and solidified, with its signature broad arrow hour hand, thinner bezel, and cleaner black dial. Presented at Basel Watch Fair along with the Rolex GMT-Master, this version of the watch would become the classic that defined the first generation of the Airman (1953 – 1978) , and the watch for which this re-issue is based.

The Glycine Airman GL0159 is a faithful reproduction of this iconic design with a few small modern changes. Gone is the square magnifier over the date, and the high polished bezel has been brushed to better suit the tool watch vibe (unlike the 2014 model, which was high polish all around). Additionally, the archaic hacking system which utilized a protruding wire at 12 o’clock has been replaced with a much more robust module within the movement itself. Beyond these minor changes, the Airman No. 1 retains all of the vintage design details that make this watch so incredibly charming. From the mechanical bezel lock to the high domed acrylic crystal, it’s hard to imagine you’re not actually wearing a vintage piece. 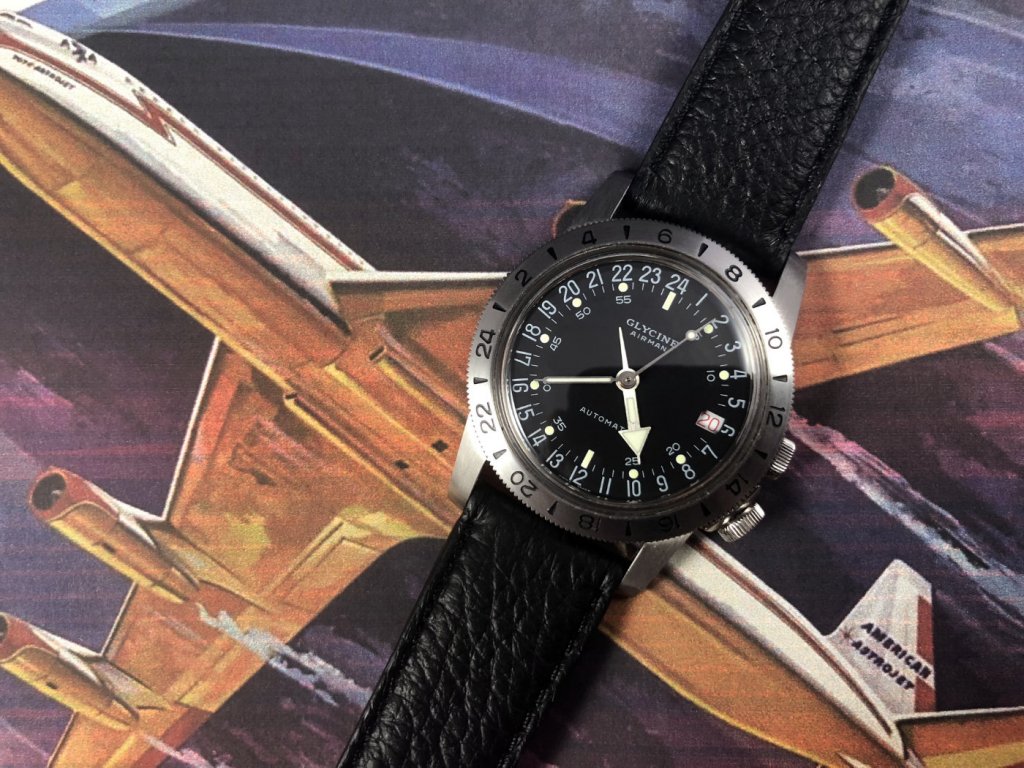 Glycine has also added a few model variations to suit the modern buyer. In addition to the white and black dial versions, Glycine has also introduced a larger 40mm model (GL0163) for those who feel the 36mm may wear a bit too small. A GMT reference is also available, forgoing the “Purist” 24-hour dial for a more intuitive 12-hour interface, relegating the 24-hour duty to the fourth GMT hand. As to which reference to choose, it’s really a matter of preference, but I prefer the purist versions of the watch. Although 24-hour time telling can be a bit of a mental challenge, it’s what makes this watch unique and interesting. The GMT version does have its benefits though. Apart from the more standard method of time-keeping, it does offer the added ability of tracking three time-zones (one on the 24-hour bezel, one with the GMT hand, and one on the standard dial).

The small case of the GL0159 is borderline dress-watch territory, eschewing the chunky proportions of most modern tool watches. While this may be a concern for some, I found the size of this piece to be quite refreshing. Larger wrists may want to opt for the 40mm model, but I found the 36mm size, with its long slender 20mm lugs and tall domed acrylic crystal to have ample wrist presence. The addition of a NATO strap gives it a bit more bulk, and after wearing this for about a week, I’m starting to feel my watch size preference shift to the smaller end of the spectrum.

The dial is absolutely classic, featuring a 24-hour chapter ring with lumed pips marking every 5 minutes. The brushed steel bezel has an additional set of 24 hour markers, and can be set easily to help indicate a second time-zone by rotating and locking the friction mounted bezel using the thumb-screw below the crown. There is something strangely satisfying about using a manual mechanical lock to prevent the bezel from moving, although a simple ratcheting system would have likely sufficed. The lume is below average I’d say, with ample glow on hand-set but subpar illumination on the markers. 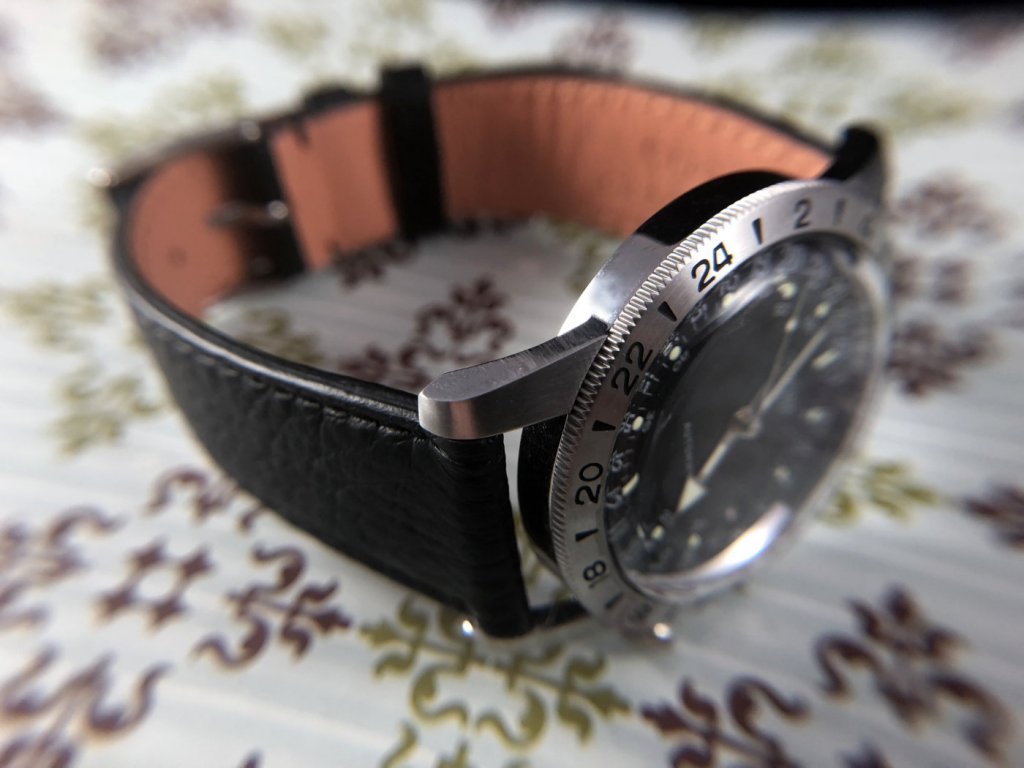 A large broad-arrow hand is used to indicate the primary hour position, while the thin pencil-shaped hand shows the elapsed minutes. One of my favorite features of the handset is the “cheater” hand extending from the back of the hour hand. Beside giving the handset a bit of visual counterbalance, it also allows you to quickly switch between 12-hour and 24-hour time by referencing the hour pointed to by the end. For example, when the broad-arrow is pointed at 13 on the dial, the tail also points to 1, giving those who aren’t familiar with 24-hour time an easy reference to the standard AM/PM time most people are familiar with. 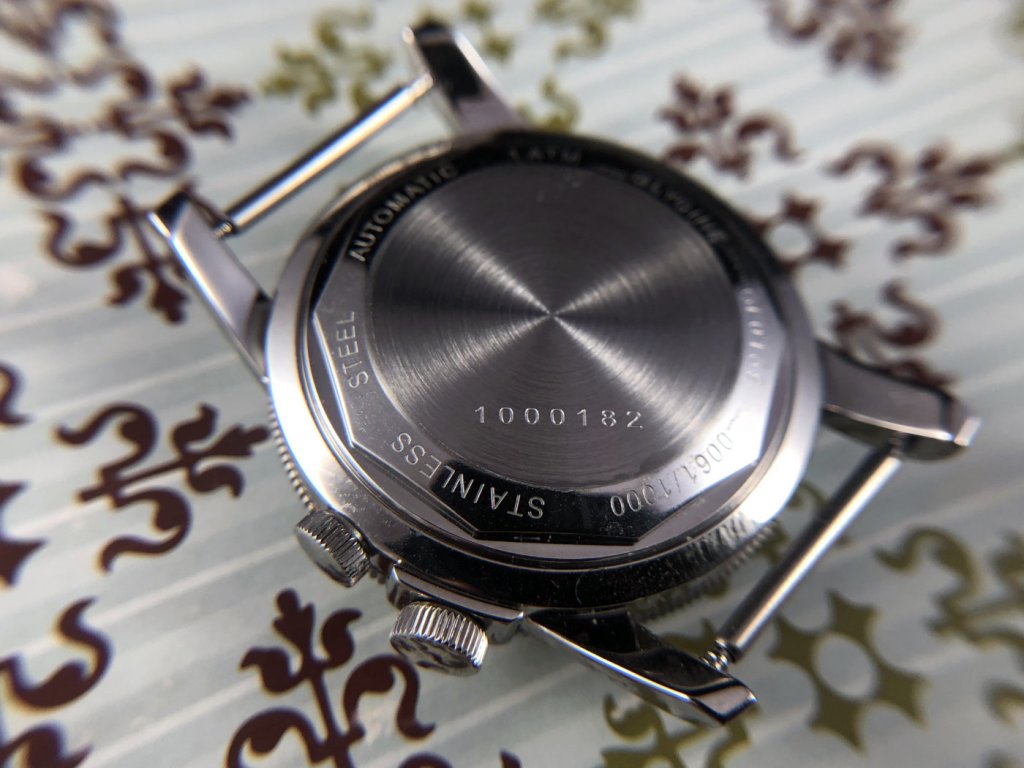 There are some questionable aspects to this design as well. While previous editions of the Airman No. 1 (released in 2014) had 100 meters of water resistance, the latest iteration has been lowered to 10 meters of water resistance. While Glycine claims that this was done as an homage to the water resistance of the original piece, it doesn’t make sense to me that it would be deliberately compromised for the sake of historical accuracy. Although pilots don’t spend much time in water (unless something has gone horribly wrong), it’s a modern watch and it would have been nice to have a bit more water resistance here to improve the watch’s versatility.

Inside the Glycine Airman No. 1 beats the Glycine GL293 25-jewel automatic, based on the Swiss-made Sellita SW330-1. With 42 hours of power reserve, 25 jewels, and a 28,800 vibrations per hour – it is nearly an identical clone of the ETA 2893-2 with a modified gear train to slow the hour hand down by one half. In fact, many Sellita movements share the exact parts, dimensions and tolerances of their ETA counterparts, utilizing expired patents as the basis of their design.

It’s no surprise that many modern watchmakers outside the Swatch group have began shifting their components to Sellita. With the dwindling supply and rising prices of the ETA ebauches, Sellita (and to some degree Soprod) provides the most cost effective (and quality comparative) alternative for those integrating Swiss-made movements.

The movement runs smoothly, hacks and hand-winds, and for all practical purposes performs and services just like an ETA. Parts are not completely interchangeable though, so be aware the Sellita parts are considered less widely available than ETA, and thus more expensive. Non-routine service costs for a Sellita movement may exceed those of a comparable ETA.

I can’t say I’m a fan of the current lineup of contemporary Glycine Airman watches. The “Airfighter” line in particular are huge, garish and over-designed watches that will likely appeal to the fashion-oriented buyers of the Invicta brand. On the flip side, I’m glad the acquisition of Glycine by Invicta hasn’t completely killed the history of the Airman, and we’re still seeing the fantastic historical references to the DC4, SST, and original Airman available for purchase. It’s a watch I’ve long wanted to own and I’m glad I finally pulled the trigger.

Limited to only 1000 pieces worldwide, the Glycine Airman No. 1 is not likely to last long. And at only around $700 – $1200, it’s a great price for a piece that has Swiss components and real military and historical provenance.

True fans of the model will likely want to look for an authentic vintage example, and many can be found for roughly double the price of the reissue. But for those who don’t necessarily like spotty service histories and well-worn dials of the past models, the new version may be the best bet. It’s got the warm vintage vibes of a new old stock piece with a brand-new, modern movement to keep it running smoothly. 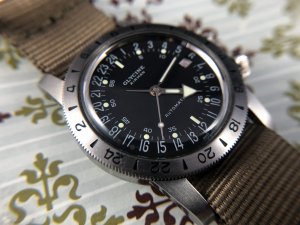 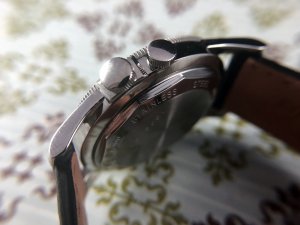 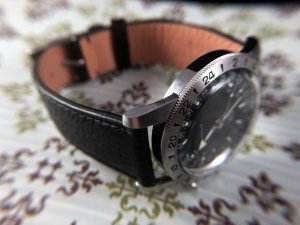 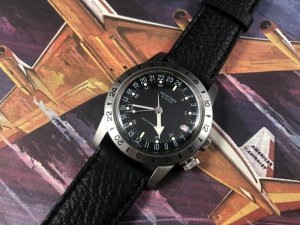 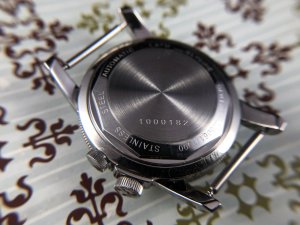 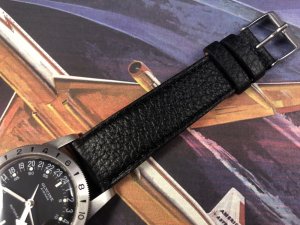 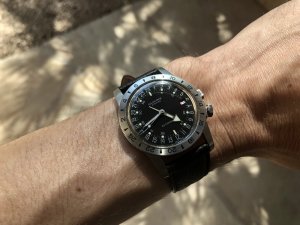