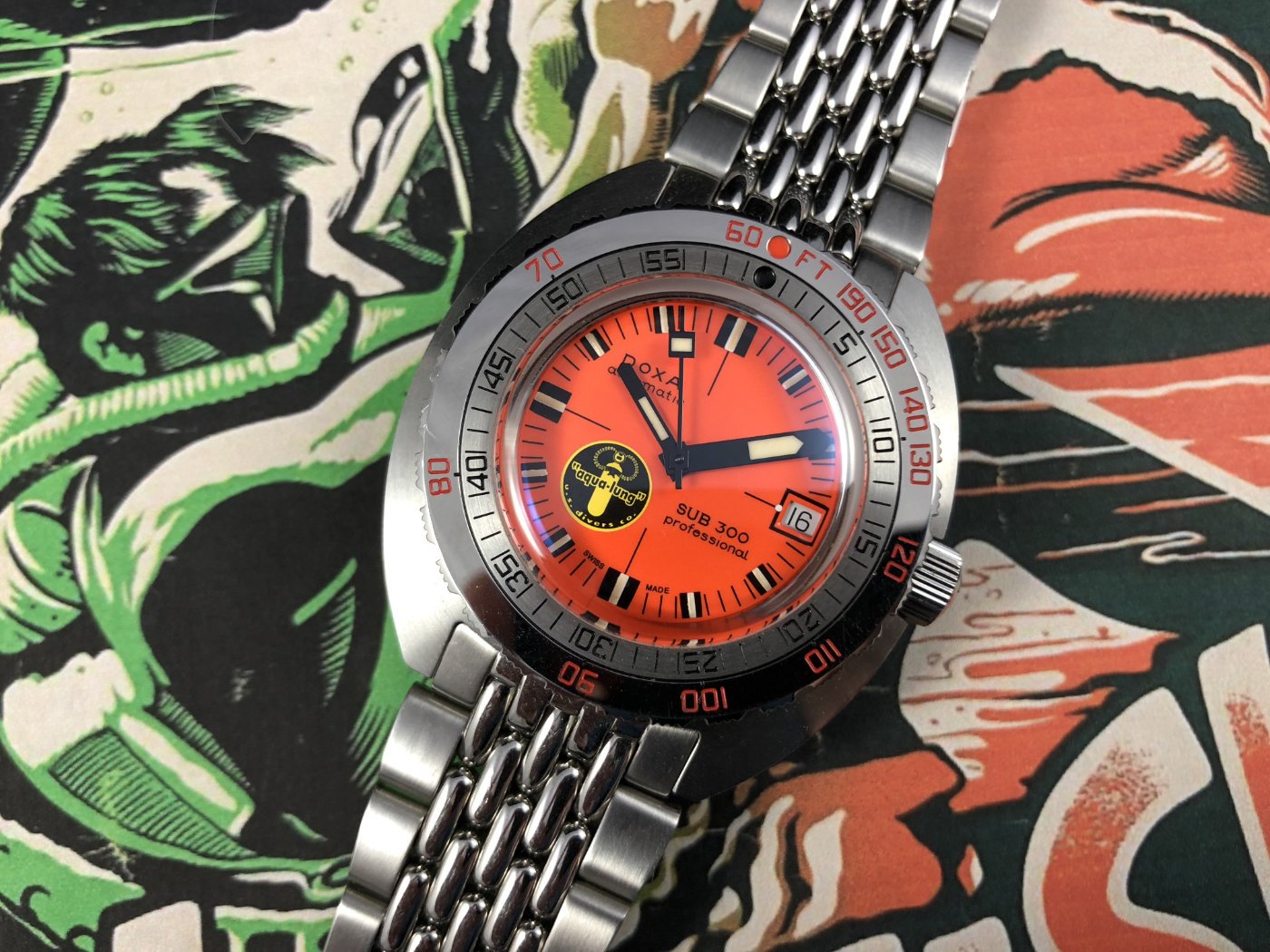 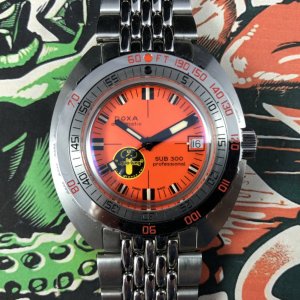 “For the love of God, talk me down off this ledge…”

That was the text I sent Brian. I followed it with a screen grab of the Doxa Sub 300 Black Lung Limited Edition. I sent both just before noon last October 1st, the Sunday morning after the watch had been released for sale at midnight.

Brian’s response? “I bought at 12:26am.” He proved it with a screenshot of his receipt.

How do you argue with that? 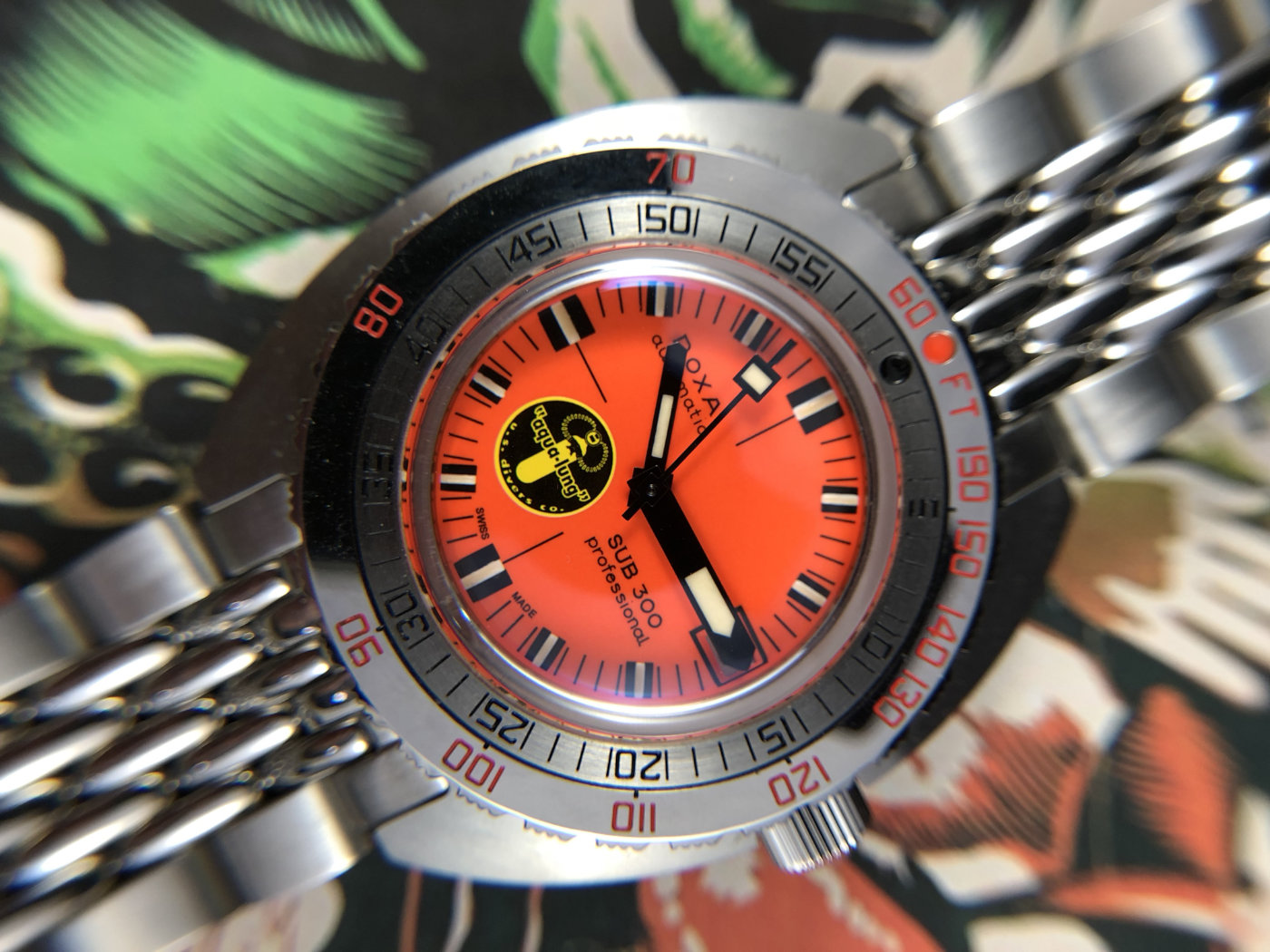 For that matter, once you lay eyes on the “Black Lung” (so-named for the black U.S. Divers aqualung logo in the lower left quadrant of the dial), how do you resist trying to get your hands on one?

The good news? If you were going to resist, you didn’t have to do so for long. The Limited Edition of 300 pieces was sold out by sometime Sunday evening. They were long gone by the time all the major blogs started posting on Monday morning.

And all that posting took place over three months ago, so you’d be correct in saying 60Clicks is late to the Black Lung dance. Be that as it may, we still love the watch and we’d like to give you our take on it.

The Black Lung came hard on the heels of the 50th anniversary edition of the original Sub 300 Professional a year earlier. That release was equally successful, and spawned Sharkhunter and Searambler reissues.

A Little Bit of History 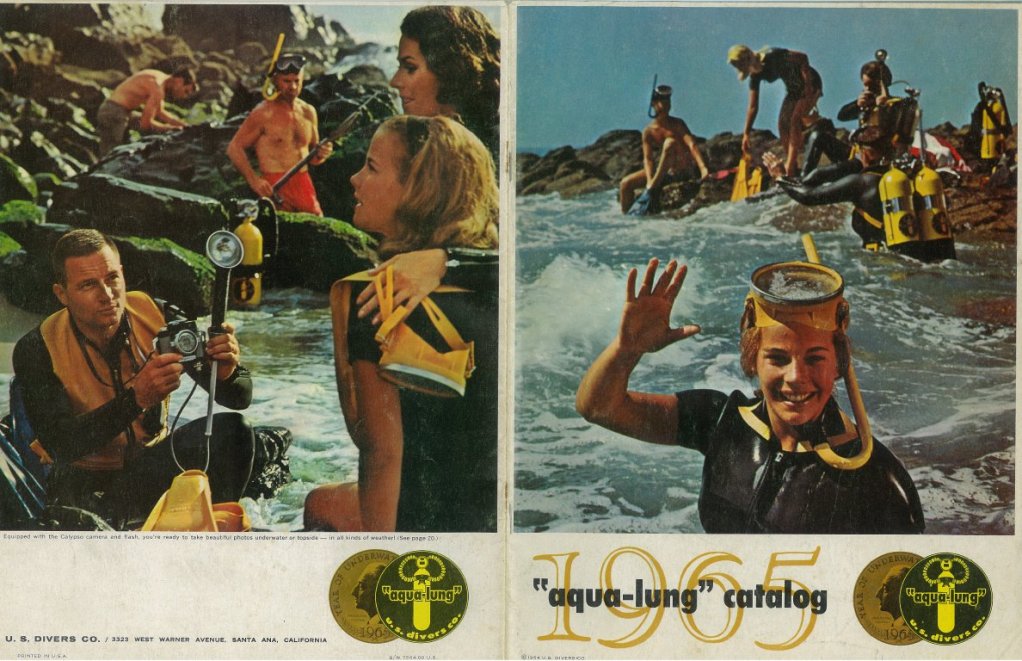 But let’s back up. The original Doxa Auqalung was born in 1967, the love child of Doxa and U.S. Divers, the diving equipment manufacturer (which would later join with Aqualung, the company). Doxa produced a mere handful of prototypes – most folks say it was ten or fewer – with the U.S. Divers “Aqualung” logo in black and yellow.

For unknown reasons (dial printing costs?), the decision was made to redo the logo in black outline only, leaving the inner field the same orange as the rest of the dial. And watch geeks being what they are, those few prototypes with the black and yellow logo took on mythic status and the moniker “Black Lung.” They were grails of the first order for dive watch collectors.

Now, fast forward fifty years. Doxa and Aqualung decided to renew their fling of a half century ago. (It’s worth noting that Aqualung itself celebrated its 75th anniversary last year at the same time the namesake Sub 300 was turning 50.)

What better way to do it than to reissue a watch built to the original Sub 300 specs – with some minor updates. And to make it a little more interesting, why not sign it with that lovely original black & yellow U.S. Divers aqualung logo?

We’ll get to the updates in a bit but for now let’s sit for a moment just to take in the new piece. First and foremost, there’s the classic Doxa Professional orange dial. The word iconic is overused these days but overused or not, it’s true here. When most people hear “Doxa,” in their minds they see orange. 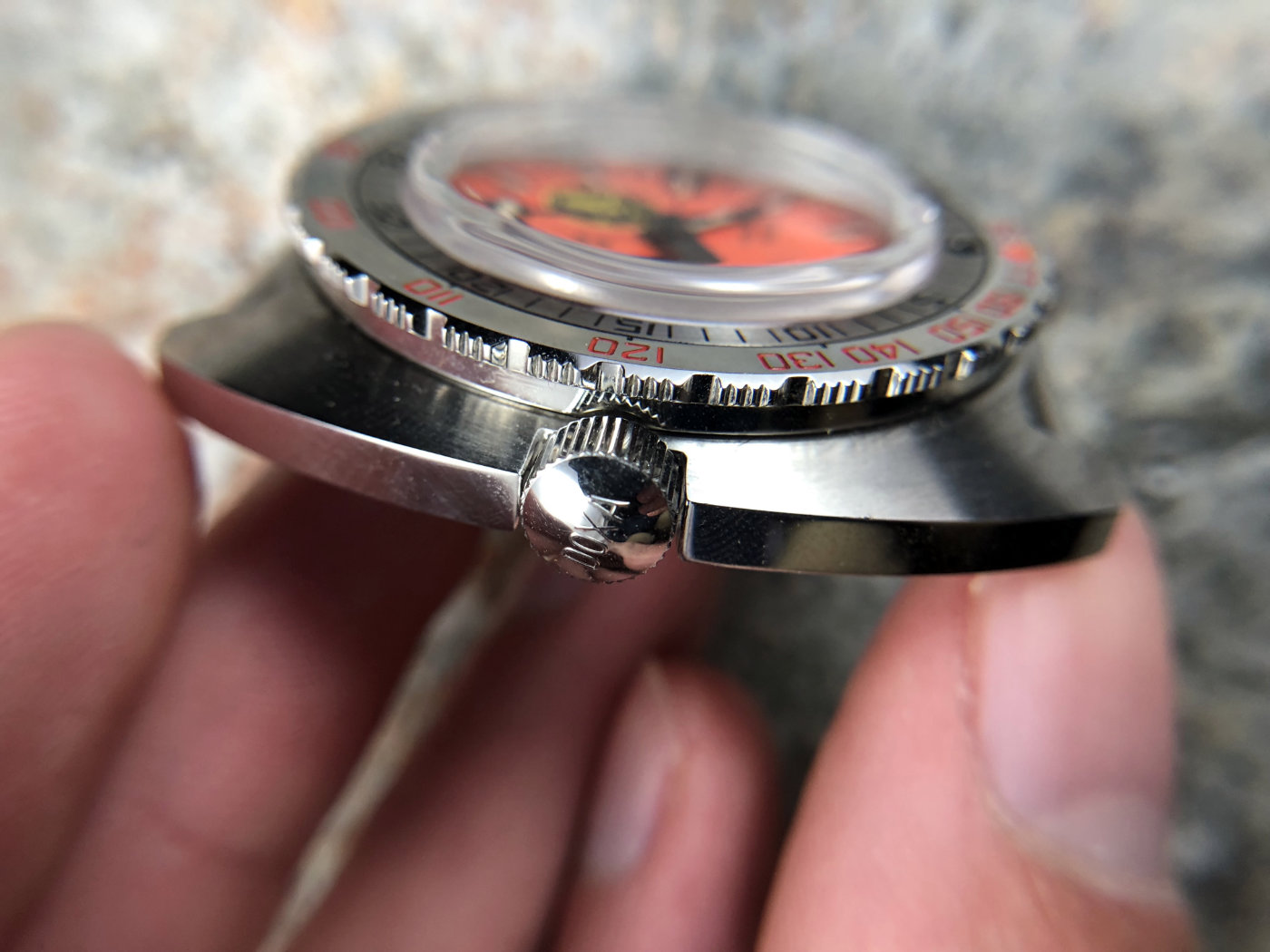 The watch is dimensionally identical to the original. The familiar cushion shaped case is 42.5mm wide, 12.4mm high, and with a dial opening smaller than the uninitiated might expect – 25.5mm.

That last dimension was due in large part to the engineering limitations of materials and case design in the mid 1960s. A smaller dial opening meant the case had greater resistance to water pressure. And the detail was kept as a true-to-the-original feature in the current watch.

In fact, the new Black Lung is so true to the original that a 50-year old true beads-of-rice bracelet will fit perfectly. Well… as perfectly as bracelets fit fifty years ago – and assuming you can find one.

The updated bracelet is not a true beads-of-rice (take one of those apart on your kitchen table to size the bracelet and you’d better be careful, or the pieces will go everywhere, like straight under the stove). Rather, it’s an update with a very similar look, but with out the dubious feature / constant threat of losing the individual rice beads during sizing. The new bracelet is really pretty standard Doxa, with a nice taper and an updated diver extension. 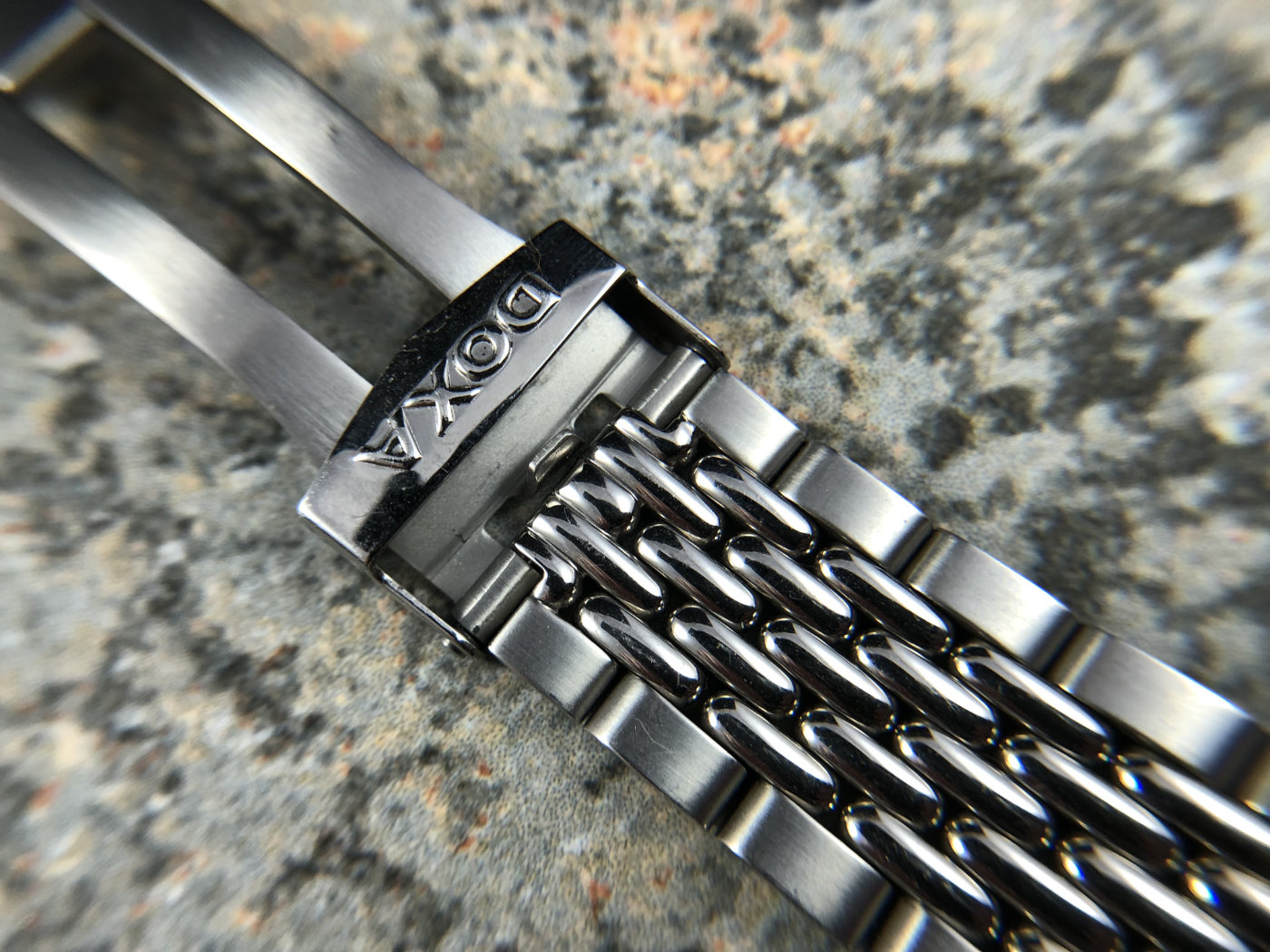 The updated diver extension, while a typically robust modern design, is an object of lament for Doxa aficionados. They, of course, would rather have seen the original 50-year old telescoping, micro-adjustable design reproduced. Alas…

The crystal is now sapphire – yep, another update, but holds nearly the same domed shape of the original plastic. If you know anything about sapphire (damn hard substance) or lens grinding (tricky stuff, that, although the technology is readily available), you can imagine reproducing the profile of the original dome in sapphire is no mean feat.

A third update is the chronometer grade, CSOC-certified ETA 2824-2 motor purring beneath the dial. However, we should note that the proud Black Lung owner will only know of the COSC status by looking at the case back or the papers which accompanied their purchase. The word ‘chronometer’ is nowhere to be found on the dial. We like that. A lot.

The no-decompression bezel has been updated a bit too. The engraving isn’t as deep as the original but the familiar Doxa saw-toothed edge is there.

As for the rest of the specs, the watch is – as the name implies – water tight to 300 meters. The hands are also true to the original, dimension-wise, but are lumed with Superlumiova. Accompanying the watch are a warranty card, the COSC certificate, a spring bar tool, Doxa’s book on the history of their dive watches, a compact disc which contains the manual, and Doxa’s standard cylindrical foam-filled case.

Yes, yes, but how does it wear!? Well, I’m on record elsewhere on 60Clicks as being only a desk diver. The closest I’ve ever come to needing a watch like the Black Lung was watching Jacques Cousteau on television when I was a kid. That same kid also drew underwater fight scenes, a la James Bond and Thunderball. Then there was that shore dive in Cozumel about fifteen years ago.

But those skills don’t give me any dive cred for reviewing a watch like this.

What I can say is the watch wears very comfortably on land. This is thanks in large part to its relatively thin case and updated beads-of-rice bracelet. In fact, the Black Lung wears considerably smaller than its 42.5mm would imply, due to the thin case and the way it’s shaped from the case back to the bottom of the bezel – much like a turtle. And the bezel, while distinct and easy to grasp, isn’t overdone either. Visually, the smaller-than-expected dial opening serves to make the watch look smaller as well.

Overall, Doxa has another winner on its hands. Of course, that was demonstrated by the early buzz and the super-fast sell out. One can only hope that there are Black Lung Sharkhunters and Searamblers waiting in the wings. 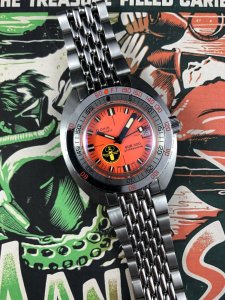 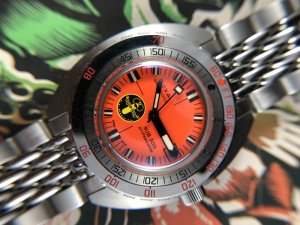 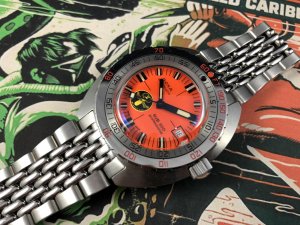 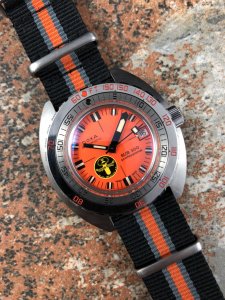 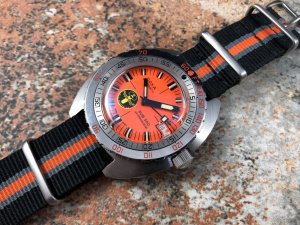 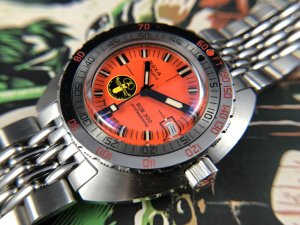 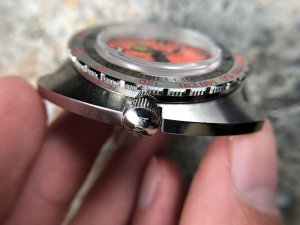 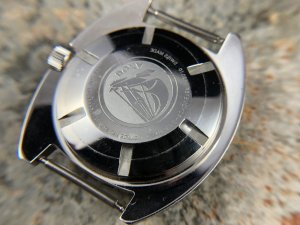 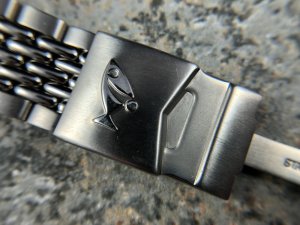 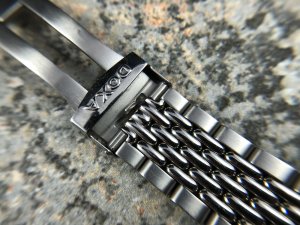 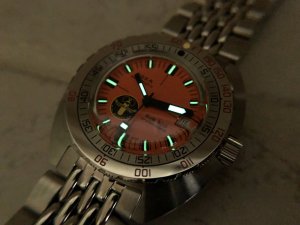 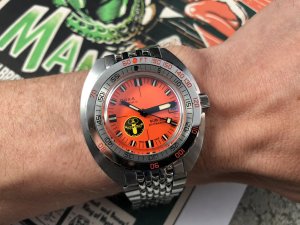