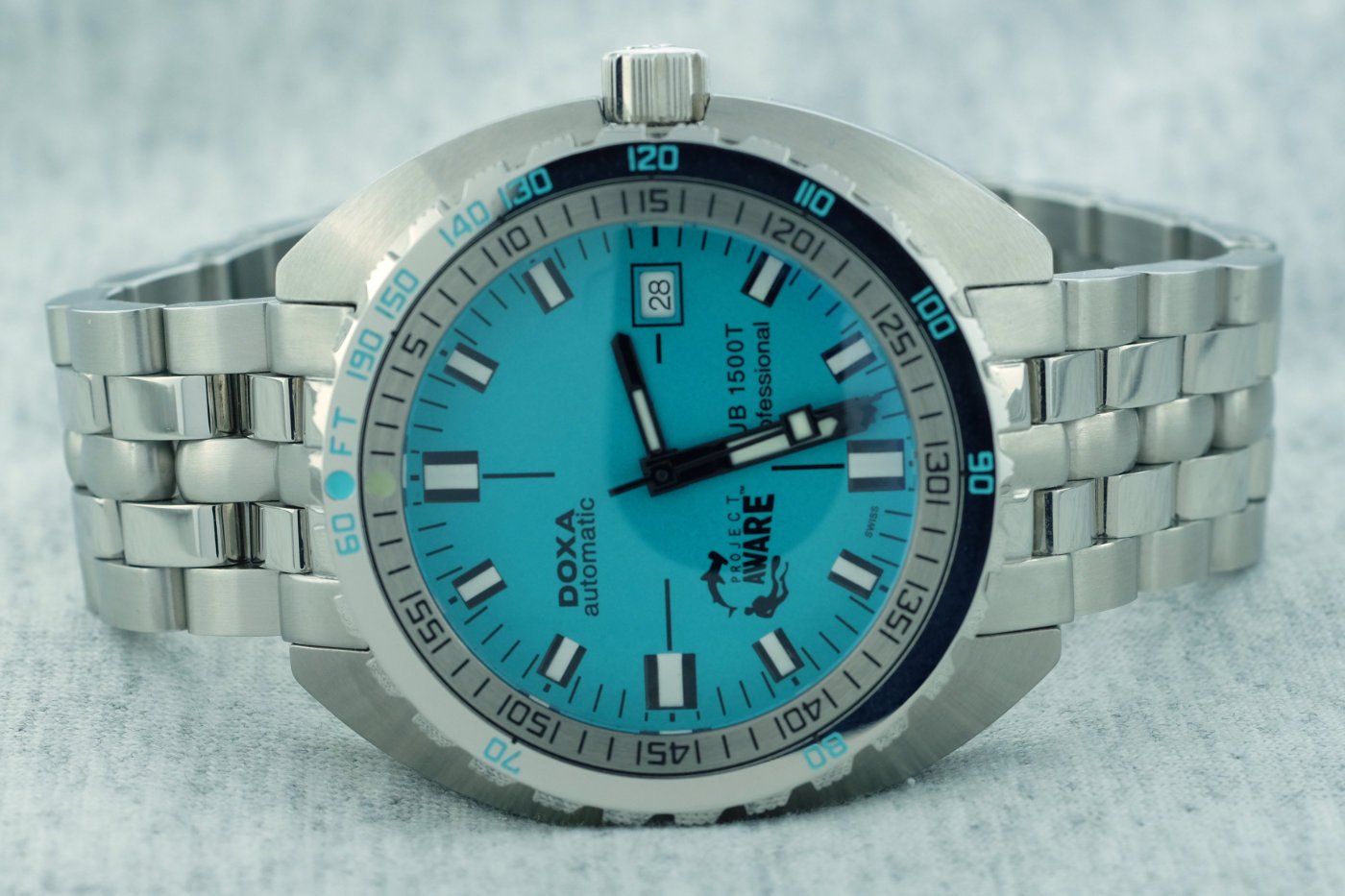 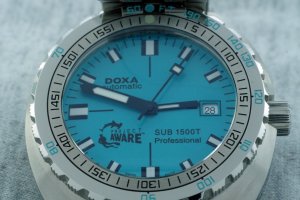 Doxa… there’s a watch brand that a non-watch geek might not recognize. In one incarnation or another, they’ve been around for 127 years. But the watch that put Doxa on the modern map – the Doxa SUB 300T – is just a tick under 50 years old.

The SUB in all its depth ratings is an iconic dive watch (yes, I know… cliché). To produce the original SUB 300T, Doxa consulted with none other than the legendary Jacques Cousteau and his dive buddy Claude Wesly.

Various versions of the piece pioneered several dive watch firsts: an orange dial for better visibility underwater (divers will tell you that was a fail, as orange turns to olive or grey at depth), a rotating bezel displaying no-decompression times (the time a diver can stay at a given depth and return to the surface without needing to stop at intervals to decompress in order to ward off the bends), and the first publically available helium release valve (more on that later).

Briefly, Project AWARE is a non-profit with offices in the United States, the UK, and Australia. The organization works with volunteer divers in two primary areas: shark conservation and marine litter. The turquoise dial of the watch takes its cue from the non-profit’s color palate, and the Project AWARE logo is printed in the lower left dial quadrant.

OK, I need to go full disclosure. I am not a diver – just a vacation snorkeler – and this is not a diving review of the SUB 1500T. I received this watch as a Christmas gift and at this writing I’ve been wearing the watch non-stop for five days. In three words, I love it.

I will say, this is a heavy beast – 219 grams, or just under a half pound. There’s no wearing it like a fashion bracelet. You’ll want it properly sized to your wrist, or the watch will quickly rotate to a head-down orientation. Luckily, Doxa’s unique micro-adjustable clasp makes this a quick and simple task.

The 316L stainless steel case is Doxa’s classic cushion shape. The screw-down case back (signed with the Doxa fish logo and engraved with the limited edition number) is solid and, along with the signed screw-down crown, gives the watch a depth rating of 5000 feet (about 80 feet over 1500 meters, where the moniker 1500 comes from).

Of course, the shape is not Doxa’s alone. It was typical of sports and professional watches in the late 1960s. Witness that era’s chronographs from Heuer and Omega, among others. But as fashion played out in the early 1970s, other brands moved on to more conventional case shapes and well-defined lugs.

Doxa, on the other hand, stayed with the cushion and it’s become a trademark of sorts. Sometimes the case is thinner, sometimes it’s thicker, depending on the depth rating of the watch in question and whether or not its sporting a helium release valve, but it makes Doxa dive watches instantly recognizable.

The uni-directional bezel is notable for its unique saw-toothed edge, which offers superb gripping ability. This renders the watch especially useful as the bezel insert is calibrated with the U.S. Navy’s no-decompression limit times.

And speaking of the helium release valve (or HRV), holes in watch cases make a lot of folks nervous. Especially holes in dive watch cases. More holes, no matter how they’re sealed, make for more risk. That’s something divers tend to want to minimize.

Additionally, an HRV-equipped watch is a highly specialized piece of kit, needed only by saturation divers living at depth for days at a time. A regular diver simply doesn’t need one. That is, until marketing departments industry-wide got ahold of the concept and used it to lure unsuspecting desk divers who might believe an HRV makes for a more formidable timepiece.

However, its presence on this limited edition watch can perhaps be forgiven. Brands tend to pull out all the stops on such pieces, in order to demonstrate their prowess in the genre.

The bracelet is a modern, heavier update of Doxa’s “beads of rice” design. It attaches to the case via screws rather than spring bars. This should be a bit more secure, assuming the screws stay tight. Similarly, the bracelet links are connected with screws. Unfortunately, these screws are double-ended – they screw and unscrew from both directions and so need two screwdrivers and three hands.

A special tool to ease the chore is available from Doxa for $79. That’s a hefty fee to pay for what should be a one-time task of setting the proper bracelet length. Your only option, however, is to proceed at your peril, with two opposing screwdrivers and a hopefully secure finger grip on the bracelet link.

The design of the hands – the diminutive hour hand coupled with an oversized minute hand – is another of Doxa’s trademarks. At depth, you really don’t care much about hours. It’s the minutes you’re concerned with, and you can’t miss – or mistake – the oversized minute hand. The square flag on the second hand enhances the wearer’s ability to track minutes. All three are filled with Superluminova for ease of reading in low light.

All of that brings us to the turquoise dial. The color is inspired by Project AWARE’s colors, and their logo is prominently displayed in the lower left quadrant. There’s no mistaking what this watch is about.

The dial is laid out in classic Doxa fashion, with wide black and white markers at the hour points. The white is Superluminova, matching the hands. Doxa’s badging is in the upper left and “SUB 1500T Professional” is in the lower right. This off-center and yet symmetrical printing is yet another feature identifying the watch as a Doxa.

Notably, the hands and dial are protected by a slightly domed anti-reflective 3mm sapphire crystal. The dome is a nice touch, and helps minimize reflections and glare.

Beneath that beautiful turquoise dial, you’ll find a high grade Soprod Alternance 10 movement. The Alternance 10 is an automatic, 25 jewel movement with date and hacking – effectively a replacement for the ETA 2892. It features 42 hours of power reserve and runs at 28,800 beats per hour.

And though you can’t see it (no display case back on this tool watch), the movement has been decorated by Doxa – a treat for your watchmaker at the next service interval.

And should you be wearing the SUB 1500T while living at depth breathing helium-rich air for a few days, fear not! Your watch won’t blow its crystal as you decompress. That HRV is protecting you.

The SUB 1500T in Project AWARE livery scratches an itch I’ve had for a long time. The retro cushion shape, along with a well-matched steel bracelet complimented by one of the more useful – and clever – dive extensions, is somehow exactly the right look for this tool of tools. The dial color is not for everybody, although it’s reportedly highly visible at depth. For me, it reflects my favorite color, that of the warm waters of the Caribbean.

I haven’t had a chance yet to pair the watch with the matching turquoise rubber strap made by Isofrane strictly for this watch. And truth be told, that may be just too much turquoise – unless you’re the matchy-matchy type (which I can be). If you’re looking for a strap to replace the bracelet and lighten the watch, maybe a darker royal blue is the ticket.

Last, perhaps most important and certainly worth repeating, Doxa donates a chunk of the proceeds from sales of the SUB 1500T Project AWARE to a very worthy cause. It’s hard to argue with that. 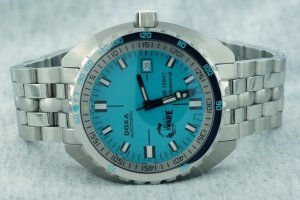 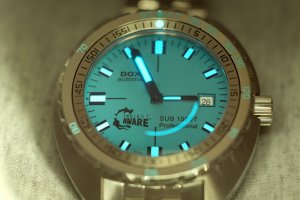 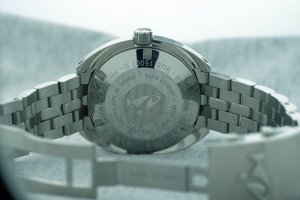 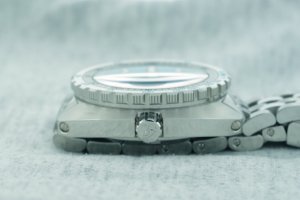 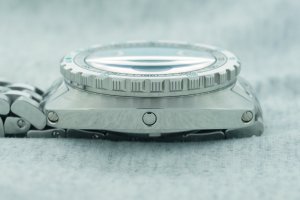 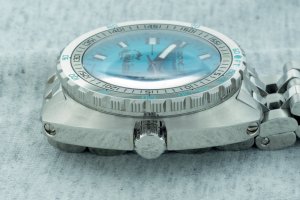 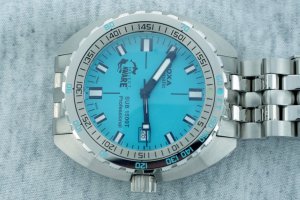 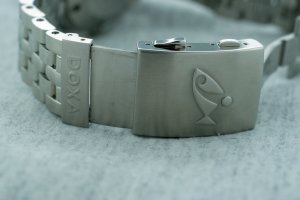 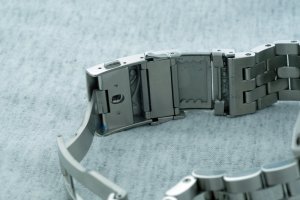 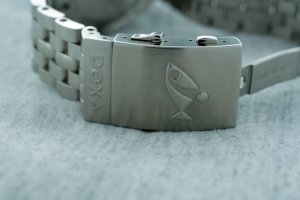 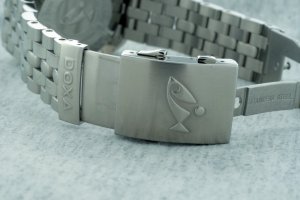